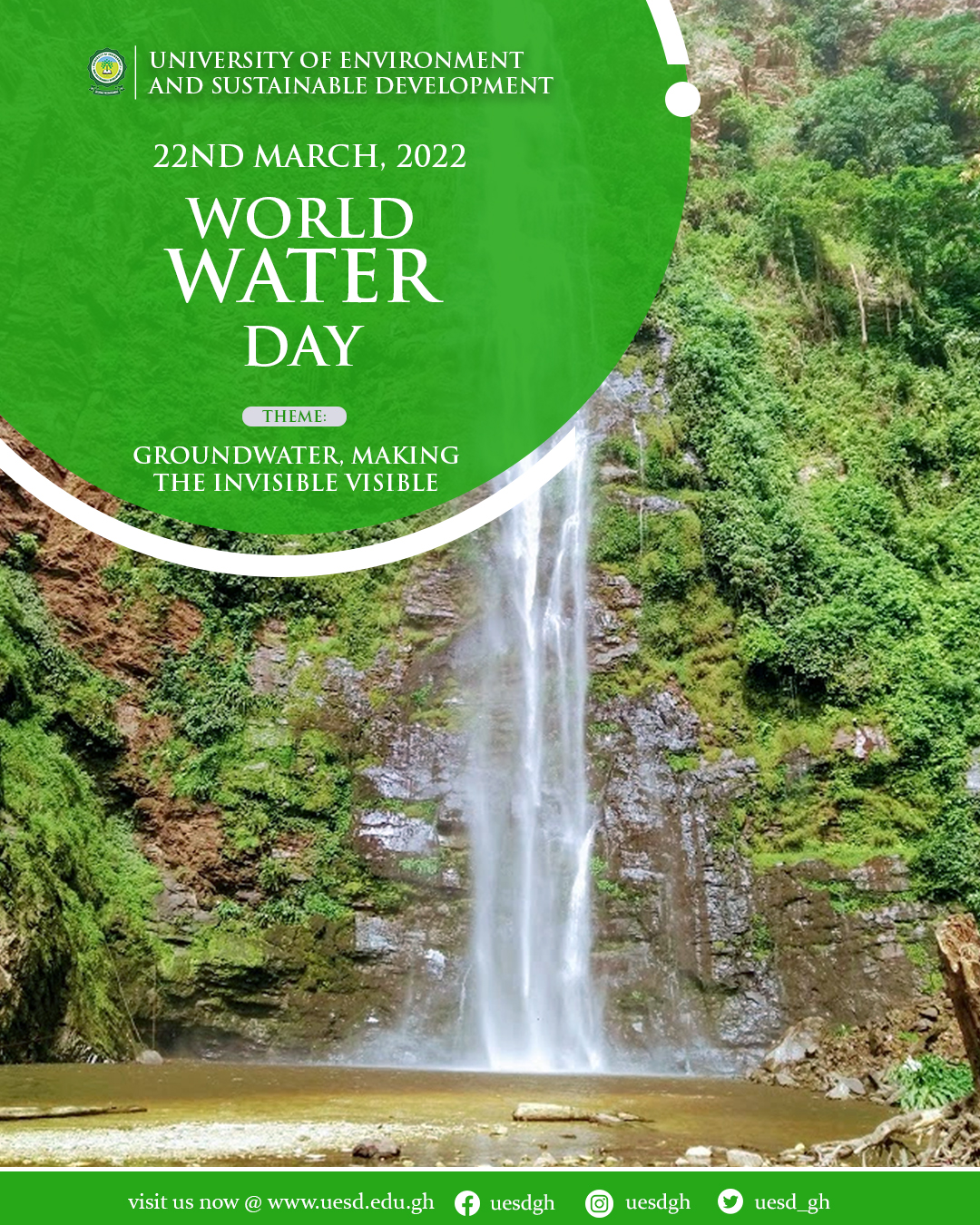 BY:  DR. RAUF ALHASSAN: LECTURER AT THE

It is often said that; “water is life,” and indeed it is life. Water cuts across all facets of our existence. Water and sanitation measures are key to poverty reduction, economic growth and environmental sustainability. However, water is a finite resource and is depleting fast, causing water shortages in many parts of the globe, especially in arid areas. Several threats such as climate change, rapid population growth, urbanization, exploitation of water for competing economic activities, such as agriculture, mining and construction, are threatening the continuous availability and accessibility of water.

Water crisis is a global crisis; hence water must be used sustainably. Considering the invaluable importance of this finite resource and the threats on its continuous availability and access, the United Nations (UN) proposed a day to acknowledge the importance of water, known as; World Water Day, to be marked every year. This was first proposed in a conference of United Nations on environment and development in 1992 in Rio de Janeiro. That same year, the United Nations General Assembly adopted a resolution which declared, the 22nd of March of each year to be marked as World Water Day, to focus on the importance of freshwater. The first World Water Day was commemorated on the 22nd of March 1993.  The day is often used to create awareness on the about 2.2 billion people who do not have access to safe water. It also focuses on taking action to tackle the global water crisis. A core emphasis of World Water Day is to support the achievement of Sustainable Development Goal 6: Water and Sanitation for all by 2030.

The theme for this year’s celebration: “Groundwater-making the invisible visible.” focuses on groundwater, ‘’an invisible resource with an impact visible everywhere.’’ Groundwater is water found underground in aquifers, which are geological formations of rocks, sands and gravels that hold substantial quantities of water. Groundwater feeds springs, rivers, lakes and wetlands, and seeps into oceans. Groundwater is recharged mainly from rain and snowfall infiltrating the ground. Groundwater can be extracted to the surface by pumps and wells. Life would not be possible without groundwater. Most arid areas of the world depend largely on groundwater.

Globally, almost all of the Earth’s water (97%) occurs as salt water in the oceans, 2% occur as snow and ice in polar and mountainous regions and only about 1% of the global water as liquid freshwater. Out the 1% liquid freshwater, more than 98% occurs as groundwater, while less than 2% occurs in the more visible form of streams and lakes. Groundwater supplies a large proportion of the water we use for drinking, sanitation, food production and industrial processes. Groundwater is also critically important to the healthy functioning of ecosystems, such as wetlands and rivers.

In Ghana, groundwater resources are made up of three geological formations with 54, 45 and 1% for the basement complex (metamorphic rocks and crystalline igneous), the consolidated sedimentary formations, and the Cenozoic and Mesozoic sedimentary rocks, respectively. Groundwater is an important water resource in Ghana and contributes immensely to the growing water demand. Rural water supply in Ghana is mainly from groundwater.

Over 10 thousand boreholes can be found across the country, supplying water to rural and urban households. Groundwater therefore holds a huge potential to contributing to the water demand of the country. The quality of groundwater is relatively good in Ghana except for some cases of localised pollution and areas with high levels of iron, fluoride and other minerals. Salinity in certain groundwater occurrences is also found especially in some coastal aquifers. Nonetheless, this cannot be taken for granted. More efforts need to be made to protect groundwater from overexploitation and pollution. Exploring, protecting and sustainably using groundwater will be central to surviving and adapting to climate change and meeting the needs of a growing population.

For sustainable, equitable and efficient water resources use, there is the need for full implementation of Integrated water resources management (IWRM) – an integrated approach that promotes coordination among all stakeholders in the water sector. IWRM is a means of achieving three thematic objectives of efficiency, equity and sustainability. Furthermore, regulations on the use of groundwater in Ghana should be fully enforced. Through these efforts, we would be charting the path towards sustainability of groundwater resources.