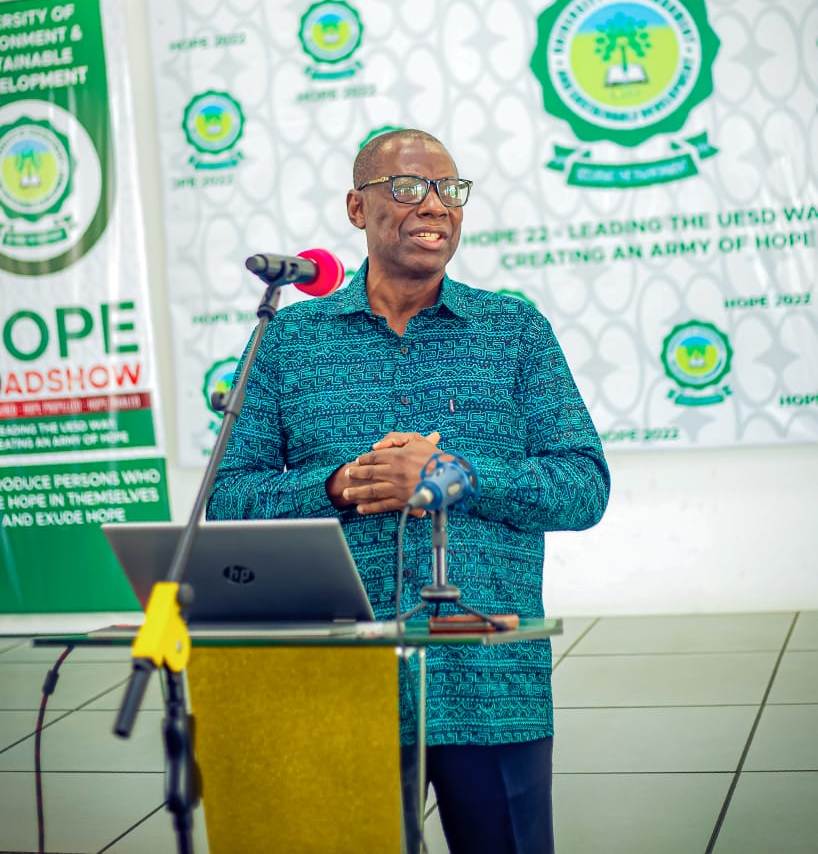 A Lecturer in Guidance and Counseling at the University of Cape Coast, Dr. John Ofori Attram, has advised students to persevere in their quest to be successful in future. He was addressing a conference for students of the University of Environment and Sustainable Development, (UESD) under its Roadshow project at Somanya in the Eastern Region.

He touched on Perseverance, one of UESD’s core values, and spoke on the topic: ‘Perseverance- No pain, no gain.’

Quoting British Prime Minister, Winston Churchill, in his statement, “the key to unlocking our potentials is continuous efforts,” Dr. Attram said, there are times people may be tempted to give up on their dreams due to the challenges they encounter, but challenges should not end their dream.

Dr. Attram stated that students’ success or failure is neither dependent on their parents nor any other person, but on themselves, else he would not have reached his present height, given the struggles his mother went through to raise him and his siblings.

He, therefore, encouraged the students to envisage their future careers and study hard towards them without relenting in their efforts.

The Mental Health Counselor said, the UESD’s core values of Honesty, Opportunity, Perseverance and Enterprising are important traits the modern-day student needs to possess in order to be competitive.

He said, for a guaranteed successful future, students are expected to exhibit Emotional Intelligence in addition to intelligence Quotient (IQ). He said, modern studies have shown that one’s success depends on a combination of both the EQ and IQ.

He explained that the IQ is needed to obtain employment and the EQ to maintain that employment. This involves control of temperament, maintaining good interpersonal relationships with colleagues, subordinates, and superiors, being open-minded and acting without sentiments.

This, he indicated was what was missing in the life of his classmate in Secondary School, who had distinction and was named the best student at the sixth form.

Dr. Attram continued that the gentleman changed Universities and dropped out at a point because he did not find the programmes he pursued at the Universities challenging enough. Decades later, he met this classmate of his in Kumasi selling locally made sandals, which he found more challenging.

Dr. Attram advised the students to consciously apply the best proportions of their Intelligence Quotient and Emotional  Quotient to achieve the best results. He said, in doing so even though they may encounter many setbacks, they should remain steadfast because ‘there is always rain after the sunshine.’

Other dignitaries at the conference were the Vice-Chancellor, Prof. Eric Nyarko-Sampson, the Director of Physical Development and Estate Management Department, (DPDEM), Dr Isaac Abbam and the Senior Assistant Registrar in charge of Administration and Services; Mrs. Vivian De-great Aidoo was the Chairperson for the session.