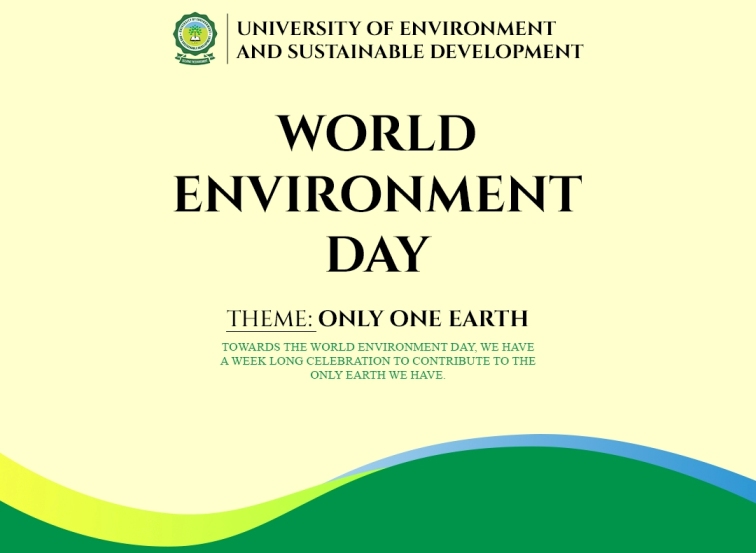 We Have Only One Earth, Let’s Take Care of It

June 5, every year is commemorated as ‘World Environment Day,’ a day set aside as a platform for environmental public outreach to draw attention of the public to the welfare of the earth.

Since its inception in 1973, World Environment Day has contributed to UNEP in raising awareness and generating political momentum around pressing issues affecting the earth (e.g., ozone layer depletion, hazardous chemicals, desertification,  global warming). The Day has progressed into a global platform for addressing pressing environmental challenges. Throughout the years, millions of people have participated and supported in the reform of our consumer habits as well as local and international environmental policies.

The world is currently experiencing a “triple planetary emergency,” which encompasses the following:

The current warming trend began around the end of the 18th century or the beginning of the 19th century, when coal became widely used. As we’ve increased our usage of fossil fuels, such as gasoline, diesel, kerosene, and natural gas, as well as the petrochemicals (plastics, pharmaceuticals, and fertilizers) we now create from oil, the warming trend has intensified.

The use of fossil fuels, which release carbon that was stored (buried) millions of years ago into the atmosphere, is blamed by scientists for the current warming trend. The addition of this “old” carbon to the world’s present carbon stock, according to scientists, is what is heating our globe and creating global warming.

Temperature rises affect vegetation, food supplies, water availability, and a number of other things. Some creatures may perish if ecosystems become unsuitable, forcing them to move outside of their regular patterns in search of food and living conditions.

Human-animal conflict is exacerbated by habitat loss and catastrophic climate events, which force people and wildlife to live in increasingly, congested habitats. As ecosystems change, people and wildlife are forced to travel further in search of food, water, and resources. Conflict between humans and nature frequently has a negative impact on the creatures involved. Birds, for example, sometimes eat maize or rice, disrupting human livelihoods and food security, resulting in retaliatory kills, further reducing already-dwindling species and numbers.

Pollution, on the other hand, is the introduction of any substance (solid, liquid, or gas) or form of energy (such as heat, sound, or radioactivity) into the environment at a pace that exceeds its ability to be dispersed, diluted, decomposed, recycled, or stored in a harmless form. Although most pollutants that pollute the air, land, and water are isolated to a single ecosystem, air, land, and water do interact. Because nutrients and pollutants from polluted locations seep into the groundwater or wash off into lakes and rivers before reaching the oceans, land pollution frequently leads to water pollution. For example, Sulfur dioxide (SO2) interacts with the water cycle in the atmosphere close to the Earth’s surface, resulting in acid rain or other kinds of acid deposition downwind or Photochemical smog is formed when nitrogen oxides (NOx) in vehicle exhaust mix with sunshine. Up in the atmosphere, Carbon dioxide and methane, which are largely by-products of burning wood, oil, natural gas, and other fossil fuels, contribute to global warming by improving the atmosphere’s ability to store heat generated at the Earth’s surface.

The theme for this year’s celebration of the world environment day is, ‘Only One Earth’. We have only one earth, let’s take care of it. It must be emphasized that nature is in a state of emergency as time runs out. To keep global warming at 1.5°C this century, annual greenhouse gas emissions must be cut in half by 2030. Without action, air pollution levels would exceed safe levels by 50% within a decade, and the amount of plastic debris entering aquatic environments will nearly triple by 2040.

To solve these critical concerns, we need to take immediate action, making “Only One Earth” and its focus on living sustainably in balance with nature as relevant as ever. True revolutionary solutions for sustainability must be available, inexpensive, and appealing in order for people to make better daily decisions. The way we create and live in our homes, towns, and places of work and worship, as well as how and where we invest our money and what we do for fun, are all crucial areas for change. It is very interesting to note that people claim they are poor in Ghana so they cannot provide simple toilets in their homes to improve sanitation, but almost everyone possesses individual mobile phone. Among the major challenges are energy, production systems, global trade and transportation systems, and biodiversity protection. Many of these opportunities can only be realized through larger organizations such as regional, national and sub-national governments, financial institutions, businesses, international organizations, and other entities with the power to rewrite the rules, shape existing goals, and open up new horizons.

Individuals and civil society, on the other hand, play a critical role as advocates, educators, and supporters. The more we speak up, the more we emphasize what has to be done and who is to blame, the more quickly things will change.

In supporting World Environment Day 2022 and the ‘Only One Earth’ campaign we can help ensure that this unique and beautiful planet remains a pleasant home for humanity. Once again, we have only one earth. Let us take care of it!