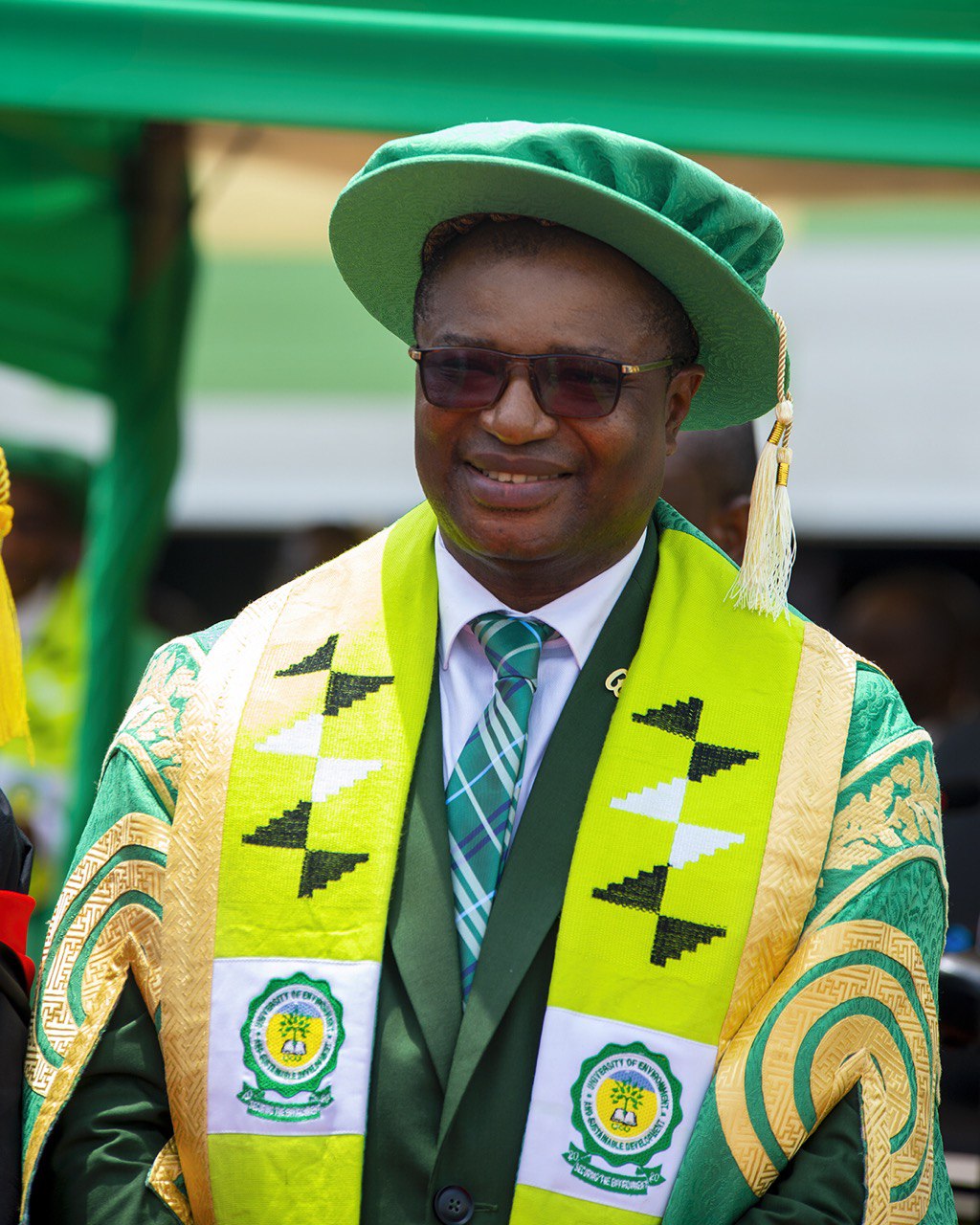 He has also suggested the creation of an Emergency Fund at the Presidency for at least the first five years of the University. This,he believes will help in building and maintaining a resilient brand in environmental and sustainable development training.

Prof. Nyarko-Sampson was delivering a speech at his Investiture as the Founding Vice-Chancellor of the UESD at a colorful ceremony held on the 3rd of June, 2022, at the Forecourt of the Multi-Purpose Building of the University. The ceremony also Inducted Mrs. Mary Abena Agyepong as the first Registrar of the University.

The solemn ceremony attracted guests including a Deputy Minister of Education, Hon. Rev. John Ntim Fordjour,(the President’s representative), Minister for Railways Development, Hon. John-Peter Amewu(MP), the clergy, traditional rulers, invited guests, friends, and families of the two, as well as staff and students of the University.

Giving a detailed report on his activities as a Vice-Chancellor within the one and a half years in office, Prof. Nyarko-Sampson stated that, as the leader of the institution – ‘I set for myself a set of defined strategic indicators which constitute the pillars of my vision.’

These included: putting together Academic and non-Academic programmess, the use of technology, Linkages and Collaborations, Collaborative Research, Faculty and Staff, Students, Institution of Faculty and Staff Awards, Internationalisation, Security, and Infrastructural Development and Management.

Prof. Nyarko-Sampson thanked the UESD Council for the opportunity given him and his team to serve. He said, the expertise of professionals from private, and public sectors, teaching and non-teaching bodies, both local and foreign with relevant and requisite qualifications have been employed to help the UESD achieve its short and long-term goals.

Core values: He said, the lack of Honesty and the can-do spirit among the youth, the seeming lack of Opportunities and the apparent reluctance of young people to Persevere, and the general lack of Enterprise, is the motivation behind the adoption of HOPE, Opportunity, Perseverance, and Enterprising, acronymed HOPE as the core values of the University.

The University, therefore, has a ‘HOPE agenda’ to pursue on campus for staff and students. He said, inculcating the HOPE agenda in their attitudes through conferences and seminars will help to produce graduates who are equipped with the relevant knowledge and skills to be well-positioned as agents of change and partners in the identification and resolution of prevailing environmental and sustainable development and life’s challenges in Ghana and beyond. Similarly, employees, through a series of workshops on the HOPE Roadshow, have been taught to inculcate the HOPE agenda in their everyday life.

Prof. Nyarko-Sampson reported that the UESD held its first International Conference in collaboration with SSD and the Friedrich Ebert Foundation, to be an annual affair.

Prof. Nyarko-Sampson said, it is his vision to use technology to aid teaching and learning, and administrative practice. To this end, all categories of staff will be trained in their respective groups. In line with this, the University plans to run at least one course online, to make staff and students abreast of the use of technology.

On research, the Founding Vice-Chancellor said, the UESD has established the Research, Innovation and Consulting Unit, RICU which coordinates research with a thirteen-member Ethics committee that has the mandate to ensure that the research carried out at UESD meets international standards.

He stated that in November, 2021, a team of three researchers of UESD, the only team from Ghana, won the University’s first research grant of Fifteen Thousand Dollars ($15,000) from the African Economic Researchers Consortium’s call on Climate Change and Economic Development in Africa. Another team of Lecturers from UESD were amongst twenty-six recipients of the Jospong Group company’s African environmental sanitation fund awards held in Accra a few weeks ago.

Prof. Nyarko-Sampson mentioned that MOUs have been signed with corporate bodies on implementing research and other areas of benefit to both institutions.

Community Development: the Vice-Chancellor said, to foster a close relationship with the communities of the University, the Community Engagement, Projects and Innovations Unit, (CEPIU), has been established under the Office of the Vice-Chancellor to promote and co-ordinate mutually beneficial activities.

He said CEPIU, in collaboration with the Institute of Statistical, Social and Economic Research (ISSER), organized farmer groups in the Yilo, Lower, and Manya Krobo Municipalities on possible solutions to deal with climate change and its effect on the crop output and how to prevent post-harvest loss.

It has also piloted the University’s annual educational project, the UESD Community Development challenge which seeks to encourage critical thinking skills, problem-solving skills, and decision-making skills on issues of environmental concern amongst pupils in upper primary.

He said, to guide the operational efficiency of the University, processes are underway to develop appropriate policies and regulations. He reaffirmed the University’s resolve to stay within its mandate and called the government to, ‘turn a special eye on the University considering the fact that a young University, delivering a science-based curriculum would have challenges in getting the student numbers to raise enough internally generally funds to run the Institution.’ He called on corporate Ghana,’ to assist this new baby of the future.’

Projects: Touching on infrastructural development and management, Prof. Nyarko- Sampson told the gathering that phase two of the construction works of the University has started. These include additional faculty buildings and two (2) storey laboratory blocks as well as staff accommodation and a recreational facility.

In his remarks, the Council Chairman, Prof. Jonathan Narh Ayertey congratulated Prof. Nyarko-Sampson and Mrs. Mary Abena Agyepong on putting all the necessary structures in place since the University started operations. He explained that Investiture is a ritual adopted by tertiary institutions to officially swear in key officers of an institution.

He said, the UESD Council is providing the Management with the necessary inputs needed in the running of the day-to-day activities of the institution. It will continue to work assiduously to ensure that the mandate of the UESD Management is met as stated in section 6 of the enabling ACT of 2015 which states that “the UESD Council will ensure the implementation of the aims of the University and determine the strategic direction of the University and monitor and evaluate policy implementation.”

He said to this end, that the UESD Council will soon be considering the draft statutes of the UESD and a five-year strategic plan for the University in order to set the framework for the University. He therefore, called for support and collaboration with institutions that share the vision with UESD.

Prof. Ayertey called on the government to empower the Minister of Education to establish a basic school on the University’s premises, to help in the development of children in the surrounding communities in which the University is located, and the children of the staff of the University. The Deputy Minister of Education, Rev. John Ntim-Fordjour, who was the guest of honour said, the government was poised to establish five STEM universities in the country to augment the existing ones. He assured Management of the UESD that all its proposals would be given the needed attention for its development as one of the young universities.

He said, the UESD was established at a time the world was faced with global challenges and climate-induced disasters, such as flooding and deforestation. He, therefore, encouraged the UESD to position itself to play and champion a front-line role in climate action through ground-breaking research, and innovations that would ensure that the world would be compelled to come to Somanya for a solution to create a habitable environment and a suitable place for humanity.