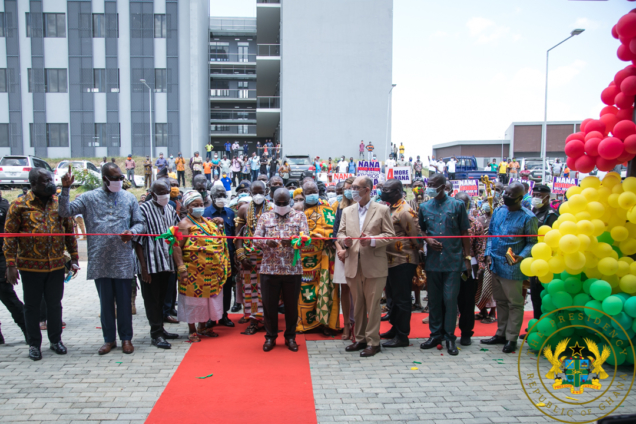 President Nana Addo Dankwa Akufo-Addo yesterday inaugurated the first phase of infrastructural development at the University of Environment and Sustainable Development (UESD) at Somanya in the Eastern Region, paving the way for the admission of the first batch of undergraduate students in the next academic year.

The President also cut the sod for commencement of the second phase of the project.

The first phase, which cost 45,575.000 Euros, includes 13 lecture halls with a total seating capacity of 1,545, a video conference room, computer research rooms, offices for lectures, a multi-purpose hall block for the school of Natural and Environmental Sciences with a seating capacity of 252 and dining hall to seat 100 people.

Others are a laboratory building for the School of Agriculture and Agro Entrepreneurship Development, administration block, 80-bed hostel, an infirmary and residences of the Vice-Chancellor, Pro-Vice-Chancellor and the Registrar.

The first phase of the project, undertaken by Messrs Contracta Costruroni, an Italian construction company, was completed within the stipulated time of 24 months.

On December 27, 2016, then President John Dramani Mahama cut the sod for work to commence on the university, which he said was a promise during the 2012 electioneering.

However, the project delayed until about

two years ago when all the bottlenecks were removed for work to start.

Commitment
At the inaugural ceremony yesterday, President Akufo-Addo said the first phase of the project showed the commitment of his government towards tertiary education delivery not only in the Krobo area, but the nation at large.

He assured the people in the area that the university would not be relocated to Bunso as it was alleged and that the inauguration of the first phase was the confirmation of his assurance to the people.

The President said the UESD was dear to the heart of the government as it was the first university in the country that was for research and would be focused on agro-business.

He expressed appreciation to the Italian government for assisting with the educational infrastructure.

President Akufo-Addo said access to education was the best thing to do to build the future of the youth.

With the completion of the first phase of the project, the President urged the management of the university to ensure that the academic year began on schedule.

President Akufo-Addo said he had no doubt that the university would admit the first batch of undergraduates in the next academic year.

He gave an assurance that phase two of the project, which would cost 49,000,000 Euros, would be completed within 30 months per the agreement with the contractors.

President Akufo-Addo said the government would do everything possible for the project to continue and be completed.

The Chairman of the Interim Council of the UESD, Prof. Jonathan Ayertey, said steps were being taken to commence academic work in September/ October this year for the first semester with two schools, namely the School of Sustainable Development and School of Natural and Environmental Sciences.

He appealed for special dispensation to be given for the provision of a university hospital and two 500-bed student hostel facilities to augment existing facilities.

The Minister of Education, Dr Matthew Opoku Prempeh, said those who doubted the free SHS programme proved the President right when the programme began.

The citing of the university was without controversy when some people especially in the Krobo area accused the present government of attempting to relocate the university to Bunso in the same Eastern Region.

President Akufo-Addo allayed the fears of the chiefs and the people of the area during his visit to the area to inspect the progress of work of the university.