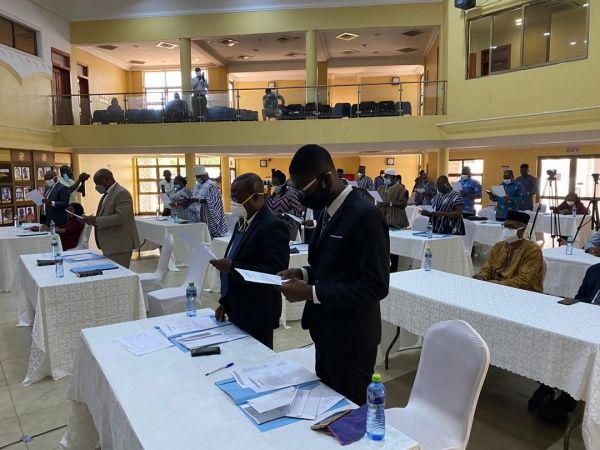 The Minister of Education, Hon. Dr. Matthew Opoku Prempeh has remarked that Ghana’s challenges in the area of environment and sustainability call for strategic leadership and innovation if we are to resolve them and improve the lives of our people.

Dr. Prempeh made these remarks when he inaugurated the interim council of the newly established University of Environment & Sustainable Development in Accra.

“The establishment of the UESD has come at an appropriate time, and it the expectation of President Akufo-Addo that the university will provide strategic leadership on environmental and sustainability issues and grow as a centre of excellence and research,” he noted.

He urged the maiden council to put the university on the path to these great heights and expressed the President’s confidence that they will live up to expectation.

The Minister further urged the interim council to ensure that it manages the recruitment of faculty and non-faculty staff as well as students in a fair, transparent manner. He reminded them that the structures that they put in place, and the processes involved in those structures, will determine the future path of this new university.

He announced that the Ministry of Finance had granted financial clearance for the three universities to recruit staff.

On behalf of the councils, Prof. Awandare said members would be guided by the need for academic excellence in the execution of their respective mandates.

The UESD is based in Somanya in the Eastern Region.

The UESD Council is chaired by Professor Jonathan N. Ayertey, the President’s nominee.

The interim management is made up of Prof. Nyarko-Sampson, Mrs Mary A. Agyepong, the Registrar, and Mr Baffour Awuah Kwabi, the Finance Officer.

The CKT-UTAS Council has Professor Gordon Akanzuwine Awandare as Chairman.

The interim management of the university is made up of Prof. Wilmot, Dr Vincent A. Ankamah, the Registrar, and Mr Michael Owusu Ansah, the Finance Officer.

The Governing Council of the SDD-UBIDS is chaired by Prof. Felix Dapare Dakora, the President’s nominee.

The interim management of the university is led by Prof. Osei, Mr Emmanuel Baidoo, the Registrar, and Mr Abdulai Suglo, the Finance Officer.

The councils were sworn in by the Minister of Education, Dr Matthew Opoku Prempeh.

During the 25th graduation of the University for Development Studies (UDS) in Tamale in November 2019, President Nana Addo Dankwa Akufo-Addo announced that Cabinet had given approval for the Wa and the Navrongo campuses of the university to become autonomous universities.