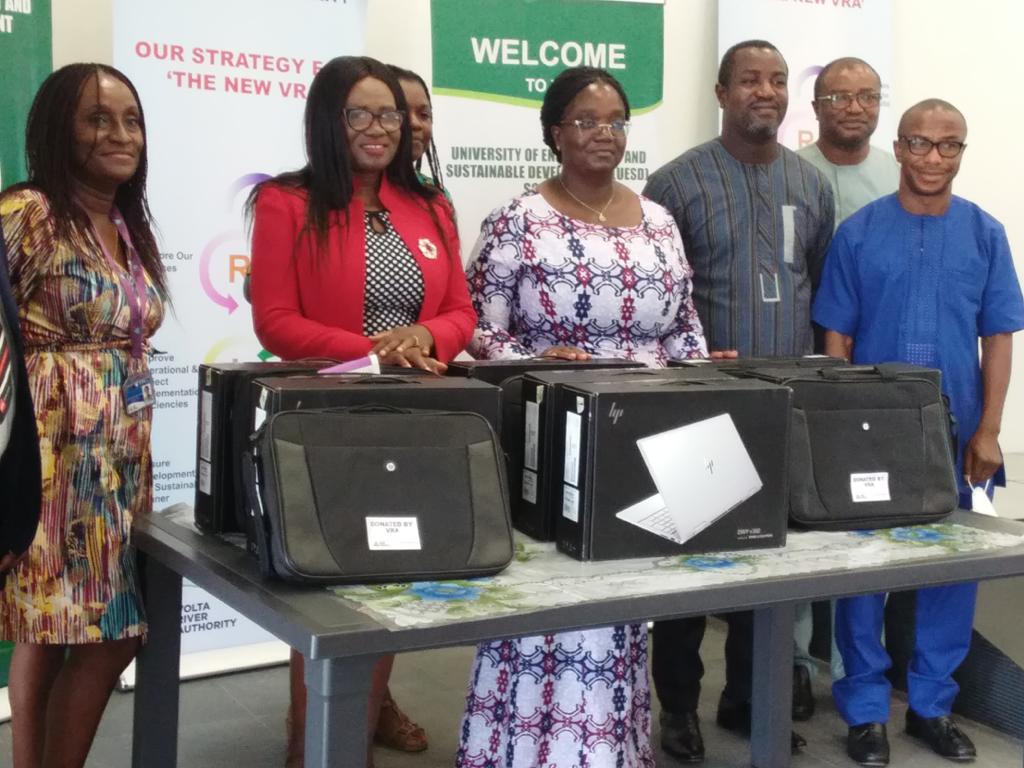 The Volta River Authority (VRA) has presented seven (7) customized high-powered laptop computers and their accessories valued at more than Seventy Thousand Ghana Cedis, to the University of Environment and Sustainable Development (UESD), at a brief ceremony in its Multipurpose Auditorium at Somanya in the Eastern Region

The items were presented bythe Deputy Director of Services and Finance of VRA Dr. (Mrs) Irene Stella Agyenim-Boateng, accompanied by her colleagues and received by the Vice-Chancellor of the UESD, Prof. Eric Nyarko-Sampson. It was witnessed by the Registrar of the University, Mrs. Mary Abena Agyepong, some Senior Members, staff and representatives of the SRC.

Presenting the items, Dr. (Mrs) Agyenim-Boateng said, the donation was part of VRA’s Corporate Social Responsibility and also to mark the Authority’s sixtieth (60) anniversary this year.

She said, Management of VRA believes the UESD has a great potential in harnessing the talents of the youth. She was optimistic, the usage of the laptops, will go a long way to impact positively on the work of the University and the students in particular.

She emphasized that the mandate of the University which is to train students in the areas of environmental sustainability and development is very crucial to the country’s fundamental survival, and there is the need for corporate bodies like the VRA to offer sponsorship and the support needed to enhance the efforts of government and the Management of the University.

Dr.(Mrs) Agyenim-Boateng revealed that VRA as a corporate entity takes so much delight in adding value to humanities and so if supporting UESD is one sure way of fulfilling that dream, then it is poised to collaborate with the University, ‘with open arms’.

Giving an insight into VRA’s activities, Dr. (Mrs.) Agyenim-Boateng indicated that VRA, apart from its core mandate of power generation, has diversified into areas of healthcare delivery, hotel and hospitality, lake transport and education. She said, considering VRA’s all-encompassing business model, it envisages several areas of collaboration between the two institutions which she is positive would yield mutual benefits. She said, the VRA was ready to collaborate with UESD to support it in areas such as IT and educational materials and its Sustainable Development office.

The Vice-Chancellor of UESD, Prof. Eric Nyarko-Sampson thanked the VRA for the kind gesture. He suggested joint research projects of mutual benefits for both institutions. He cited the new species of catfish discovered in the River Volta, which is more robust and has a higher lifespan. He said, further research into that area will help serve as a source of alternative livelihood for indigenes of Somanya, Akuse, Kpong and surrounding communities.

Prof. Nyarko-Sampson spoke about the University’s intention to form touched University to form partnership with VRA where experts of the VRA are given the opportunity to make inputs into the curricular being run in the various Schools at the University.

He said, with contributions from both academia and industry, it has the tendency to ensure that students churned out have well-rounded knowledge in the prevailing environmental challenges. Prof. Nyarko-Sampson also touched on the possibility of both institutions coming together to initiate community engagement projects through the University’s Community Engagement Unit which would benefit Somanya and its surrounding communities. The Vice Chancellor, Prof. Nyarko-Sampson wished the VRA a happy sixtieth anniversary.

The Registrar of UESD, Mrs. Mary Abena Agyepong who co-ordinated the presentation of the items gave a profile of the University. She said the UESD was inaugurated on the 5th of August last year; It is has its first batch of staff and students of Two Hundred and Ninety Four (294) and Seventy Seven (77) students. She said the University’s vision has been couched to be a leading University in the teaching, learning and dissemination of knowledge related to developments in environment and agro-business, and create knowledge through research for national development.

It has its core values to train students to be graduates of H.O.P.E, meaning, graduates who will be Honest, cease Opportunities that come their way, will Persevere in their endeavors and be Enterprising. Mrs Agyepong described the donation as significant and also in consonance with the signature of the University to foster relations with persons outside its corridors.