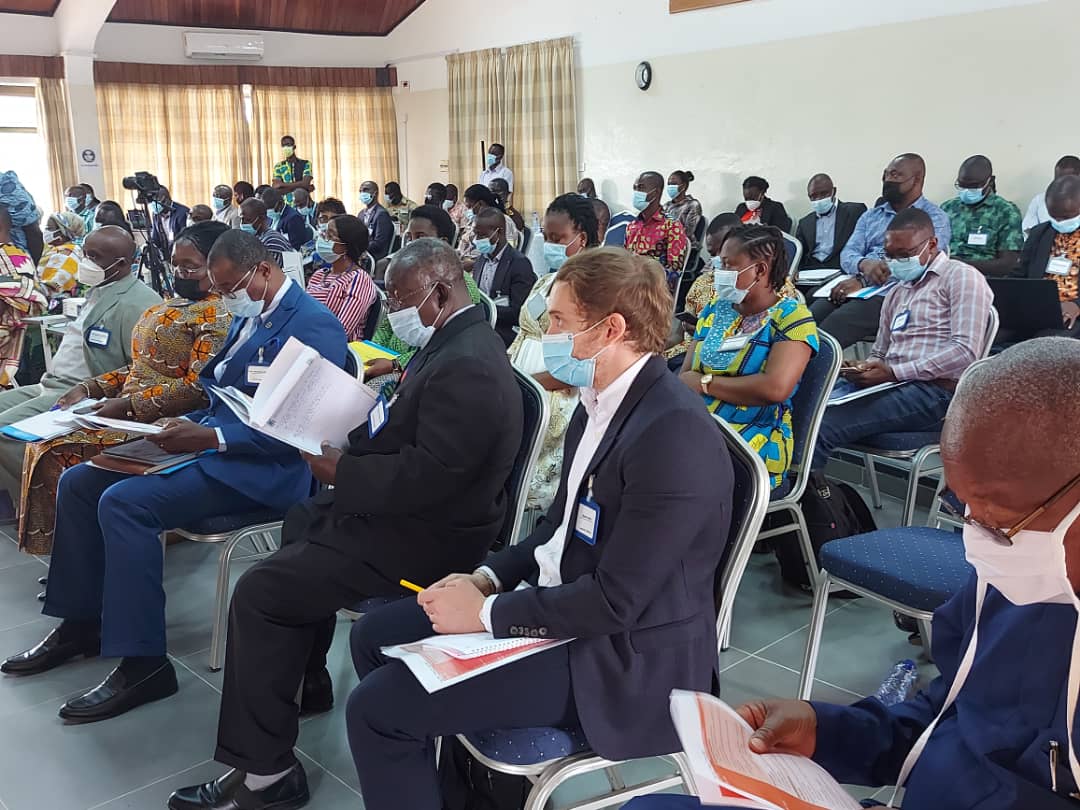 Academics of the UESD and their counterparts in and outside the country including researchers and representatives of Civil Society have converged on the Akosombo hotel in the Eastern Region for the maiden conference of the University, being held in collaboration with the Friedrich-Ebert-Stiftung, Ghana.

Academics of the University of Environment and Sustainable Development, (UESD) and their counterparts in and outside the country including researchers and representatives of Civil Society Organisations converged at the Volta Hotel, Akosombo in the Eastern Region for the maiden conference of the University, which was held in collaboration with the Friedrich-Ebert-Stiftung, Ghana, an NGO.

More than eighty participants, (including on-line participants) from Ghana, Nigeria, Kenya, South Africa, Finland, Belgium and Canada took part in the three- day conference, referred to as the Sustainability Development Conference 2021, on the theme: ‘Towards Environmental, Economics and Socio-Political Sustainability: Exploring Research, which took place at Volta Hotel, Akosombo in the Eastern Region.

Giving his welcome address, the Vice-Chancellor, Prof. Eric-Nyarko Sampson explained, the UESD in collaboration with its partner, the Friedrich Ebert Stiftung created the platform for the academic discourse in contributing to knowledge and effort to achieve the Seventeen (17) Sustainable Development Goals.

Commenting on the theme for the conference: Towards Environmental, Economic and Socio-Political Sustainability: Exploring Research and Policy Evidence’, Prof. Nyarko-Sampson said, it is important to state that the world made some progress towards achieving the seventeen (17) SDG’s before the pandemic even though some goals were off track. There is the need to strategise as a country to overcome the barriers towards the attainment of the various targets of the SDG’s. This can be possible partly through researches presented during the conference.

Prof. Nyarko-Sampson indicated that the Sustainable Development conference is the first in the series of international conferences being held by the University and he was impressed with the responses from participants. He said, the University received about seventy five (75) abstracts from researchers in Ghana, Africa and Europe to present at the conference, out of which sixty papers were accepted- fifteen in-person presentations and forty five (45) virtually held.  He congratulated the researchers on participating and thanked the sponsor, of the conference, the Friedrich Ebert Stiftung for collaborating with the University.

Prof. Nyarko-Sampson reiterated that, the UESD envisages to be a leading University in the teaching, learning and dissemination of knowledge related to developments in environment and agro-business and also to create knowledge through research for national development. It places premium on quality research and opportunities to share research findings within the University’s mandate.

The Resident Director of Friedrich Ebert Stiftung, FES Mr. Johan Ivanov said the FES is a German NGO established in 1925. It promotes democracy, social justice and economic reform through policy development, capacity building and dialogue. He was hopeful the conference will offer the strategies needed to help achieve the SDG’s. He was also positive that its partnership with the UESD will be long lasting

The chairman for the conference, Prof. Jonathan Narh Ayertey, who is the UESD Council chairman, said globally, academics engage in researches and enquiry to consolidate and to shape existing knowledge and also share new ideas with their colleagues. Conferences such as this provide the opportunity for the exchange of information among academics and policy makers to shape social, economic and development pathways.

The UESD partnership with the Friedrich Ebert Stiftung is a major milestone in the existence of the six month old University. Prof. Ayertey said, ‘despite the nature of structural transformation in Africa which oscillates between primary industrialisation and low employment growth, there is the potential of creating sustainable employment and development to meet the growing population needs with minimal environmental impact’. He stressed.

He said the Sustainable Development conference is providing the platform to discuss the convergence of ideas among the participants from academia, NGO and CSO’s to contribute to a larger debate that seeks to shape sustainable development in Sub-Saharan Africa.

The guest speaker was a Senior Lecturer at the School of Sustainable Development, SSD, of the UESD, Dr. Gibrilla Abass. His topic was: Small Scale Mining or galamsey, as a blessing or a curse.

Dr. Abass examined the mining industry in Ghana and most importantly the impact of the recent ban on artisanal and small scale mining with focus on mining towns in the South West Region of Ghana.

He said, it is estimated that more than Five Hundred Thousand (500,000) people are involved in the industry. With the hike in gold prices between 2005 and 2007, there was a rush to Ghana by foreigners to prospect for gold, using advanced equipment. The techniques and scale of the new Artisanal Small Scale Mining, led to farmers, especially the females working in cocoa growing areas like the South West Region to venture into it.

Effect: This led to the destruction of forests, soil degradation, pollution of water bodies (chemical compounds) and degradation, resulting in increased cost of water treatment and subsequent hikes in prices of potable water supply, affecting not only mining communities in Ghana, but also, it’s neighbour Cote d’lvore. The rivers Birim, Ankobra, Pra and Tano were badly polluted.

The effect of this practice  which had social and health implications led to drug abuse, HIV and AIDS, Tuberculosis, increased kidney problems and malaria.

Intervention: Dr. Abass said, to halt the practice, a number of interventions were employed including the military ‘operation vanguard’ in 2018 and ‘operation halt galamsey’ in 2021. But sadly, the military style yielded little success, largely due to lack of proper onboard consultation.

Why the war against Galamsey Failed. The researcher attributed the failure in galamsey to socio-political reasons. These included. poor economic conditions, increased youth unemployment, illiteracy which drives people into artisanal small scale mining, alleged corruption of government forces,  non enforcement of laws, complex and cumbersome licensing procedure and the fact that galamsey has been politicized.

Argument of Galamsey: The researcher argues that, despite the challenges associated with the practise, galamsey has some positives. It provides job for the people, it has a strong potential for rural poverty reduction if regulated effectively and the stoppage of galamsey will lead to high robbery cases.

On the way forward in the fight against galamsey, Dr. Gibrilla Abass proposed that government took the first and important step to stop galamsey in its current form “at all cost”. Policy makers must put land owners, communities and miners to identify common grounds, the laws on mining must be amended to provide more clarity, for instance, whether galamsey is a small scale or large scale, identifying the political drivers in galamsey and viewing the galamsey menace as technical, economic, social and political issues allocating a strong leadership of the chain of command. The presenter concluded that:’ the fight against galamsey is a fight for our survival. Its success depends on our collective actions and inactions’, he concluded.

Other participants at the opening ceremony were representatives of the traditional authority in the Yilo Krobo Municipality, Management members of the UESD, Directors, Deans, Heads of Department, Unit Heads as well as other members of staff.

More than fifty papers were presented at the three day conference which were only on-line presentations on the first day and both on-line and physical in the second and third days. Among the presenters was, the Registrar of UESD, Mrs. Mary Abena Agyepong. Her topic was; ‘Women, ICT usage and structural transformation in Ghana: A case study of Manya and Yilo Krobo Municipalities. The other presenters included, Prof. D. Dodoo-Arhin, from the University of Ghana, Dr. Millicent Awuku, of UESD, Prof. Simplice Asongu, of the African Governance and Development Institute, Dr. Emelia Amoako-Asiedu, UESD and an Economist, Mr. Seth Tekper, who was also  the former Minister of Finance. The three-day conference was from Thursday, July 22 to Saturday July 24.