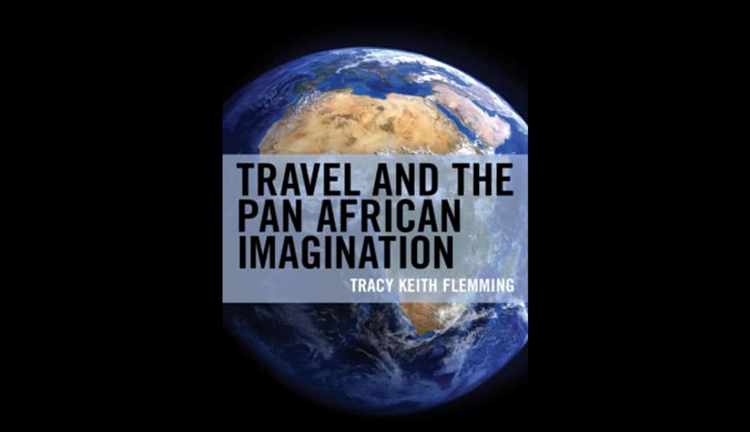 A Senior Lecturer at the Department of General Studies of the School of Natural and Environmental Sciences (SNES) of the University of Environment and Sustainable Development (UESD), Dr. Tracy Flemming has presented a copy of his newly-published book to Management of the University. The 350-paged book was received by the Vice-Chancellor, Prof. Eric Nyarko-Sampson in his office.

The book titled: “Travel and the Pan African Imagination,” and published by Lexington Books.

Dr. Flemming, a Lecturer in Human Population and Environment explained that he was inspired to write the book as his contribution to the struggle for Black African liberation.

Giving highlights of the book, Dr. Flemming explained that it among other things examines the religious origins of Black Power ideology and modern Pan Africanism as products of the African world, about concepts of modernity, progress, and civilization.

It also explores the African Atlantic world as a productive theatre or space where modernity, racialized dominance, and racialized took form. The book stresses the importance of placing three Atlantic figures; the Charleston, South Carolina based armed resistance leader Denmark Vesey; the West African emigration advocate Edward Wilmot Blyden; and the Christian missionary and teacher in Liberia as well as the United States, Alexander Crummell within an Atlantic context and as African world community figures between the late eighteenth and early twentieth centuries.

Dr. Flemming was confident that the book will do well on the local and foreign scene and make the desired impact on society.

Commenting, Prof. Nyarko-Sampson said, as academics, it is prudent to share their thoughts through publications. One of the ways to be remembered is through the books they publish. He therefore commended Dr. Flemming for his publication and thanked him for presenting a copy to Management.

Prof. Nyarko-Sampson expressed the hope that copies of the book will be made available electronically for students of UESD and their counterparts elsewhere to access. END