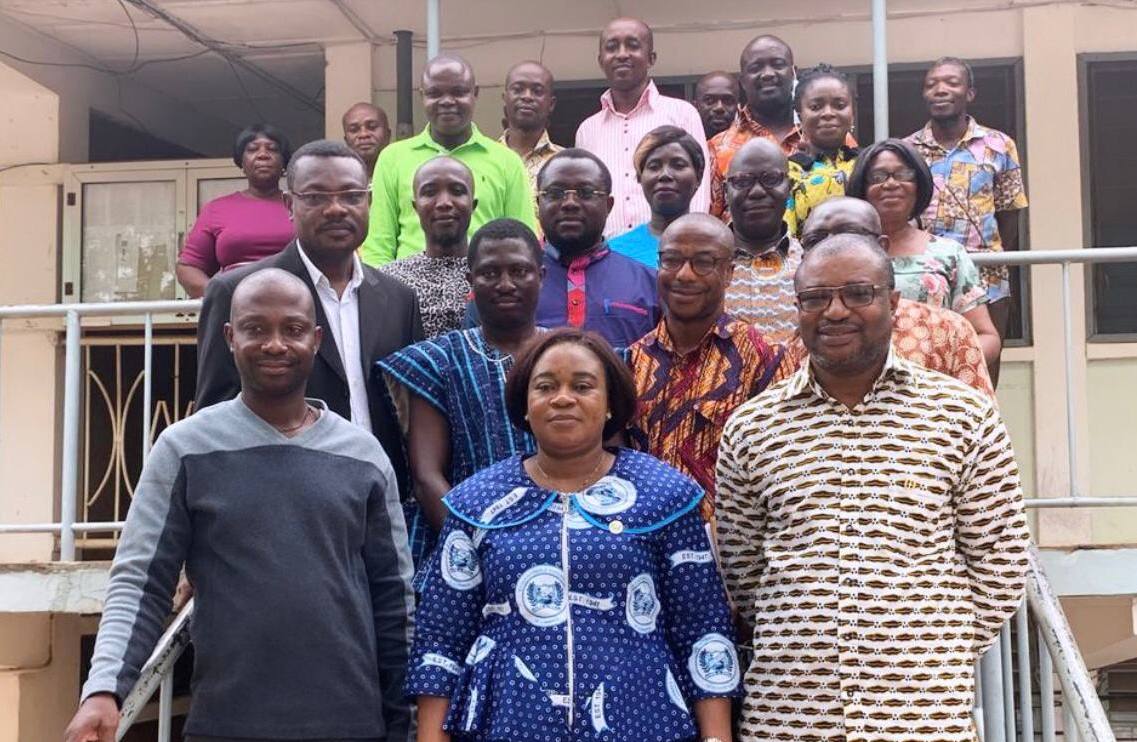 The Vice-Chancellor of the University Environment and Sustainable Development (UESD), Prof. Eric Nyarko-Sampson says Management is in talks with some benevolent agencies and individuals to institute a scholarship package for students at the University who would need assistance.

He has also acknowledged the contributions of the Konor (Paramount chief) of the Yilo Krobo Traditional area, Nuer Anorbaa Sasraku II and some Lecturers of the University who are financially supportive of some students in the University.

Prof. Nyarko-Sampson made this known at a meeting with the Principal, Heads of Department and Tutors of the Mount Mary College of Education at its campus in Somanya in the Eastern Region during a visit to the College.

He was accompanied by the Dean of the School of Natural and Environmental Sciences (SNES), Prof. Edward Wiafe Debrah and some Unit Heads. They were received by the Principal of the College, Dr. (Mrs.) Cecilia Esinam E. Agbeh and the College Secretary, Rev. Father Alloysius Ekow Mensah.

Prof. Nyarko-Sampson explained, the purpose of the visit was to bring the University to the doorstep of schools in the Yilo and Manya Municipalities, meet the Heads, Management and students of the schools and tell them who we are and what we have. He continued that, as a tertiary institution, the meeting with the College is also to draw synergies since both institutions are in the tertiary space and collaborate in areas that will be beneficial to both institutions.

In a PowerPoint presentation, Prof. Eric Nyarko-Sampson gave a brief introduction to the University and mentioned that currently, twenty programmes (20) have been approved by the Ghana Tertiary Education Commission; GTEC. He announced that Management is in the process of introducing French as a compulsory subject for all students of the University, beginning next academic year.

He said, considering that the University is bounded by French-speaking countries, it is expected to equip the students with functional French.

The presentation also showed pictures of the magnificent and ultra-modern smart buildings of the university which include the one thousand, five hundred and forty-five (1,545) student capacity lecture blocks, laboratories with fully furnished state-of-the-art facilities and equipment, the Multipurpose hall, the University hostel and the water treatment plant which removes contaminants from waste water for reuse.

Prof. Eric Nyarko-Sampson revealed that in order to fulfil the UESD’s dream of being the leading University in the teaching and learning and dissemination of knowledge said, it is making conscious efforts to form collaborations and partnerships with some industries, government agencies and NGOs to give the students practical and on-the-job experience. The move is to ensure that students churned out are fully baked for society and the job market.

The Vice-Chancellor also talked about the current state of the University’s infrastructure which is in its second phase.

After the presentation, there were questions on the entry qualifications, job prospects, Scholarships, accommodation for students on campus, scholarship opportunities, and possible collaborations with the College on some social and environmental issues.

Prof. Nyarko-Sampson, answering the question on hostel facilities, mentioned that the University prides itself on a fully-furnished ultra-modern hostel facility with spacious rooms, kitchens and washrooms that are special needs friendly.

In the areas of collaboration with the College, the Vice-Chancellor indicated that through the Community Engagement and Projects Innovations Unit (CEPIU) both institutions can team up in research and advocacy to explore areas such as sanitation, hygiene, alternative means of livelihood and addressing teenage pregnancy.

Answering a question on entry qualification, the Dean of SNES, Prof. Wiafe Debrah stated that with a minimum of grade C6 in three (3) core subjects including English, Maths and Integrated Science/Social Studies, and three (3) relevant elective subjects, prospective candidates are eligible to apply. He added that there is also an opportunity for diploma holders and mature students aged 25 and above, who pass an entrance examination and interview organised by the University.

On job prospects, Prof. Wiafe Debrah, reiterated that programmes introduced in the University are uniquely thought through and meant to solve emerging social and environmental problems.

The Principal of the College, Dr. (Mrs.) Cecilia Esinam Agbeh, on behalf of Management, expressed gratitude to the Vice-Chancellor and his team for the visit. She indicated the College’s interest in collaborating with the university on issues discussed in the meeting.

She was particularly interested in replicating UESD’s water treatment plant at the College. She said, a water recycling plant would reduce the perennial water shortage experienced in the College.

Briefing the Vice-Chancellor about the College, Dr. (Mrs.) Agbeh said, the College has four Levels and runs two cohorts at a time. She stated that the College which will mark its 75th anniversary this year currently has a student population of more than one thousand six hundred (1,600) with seven (7) Departments with French having the largest Department.