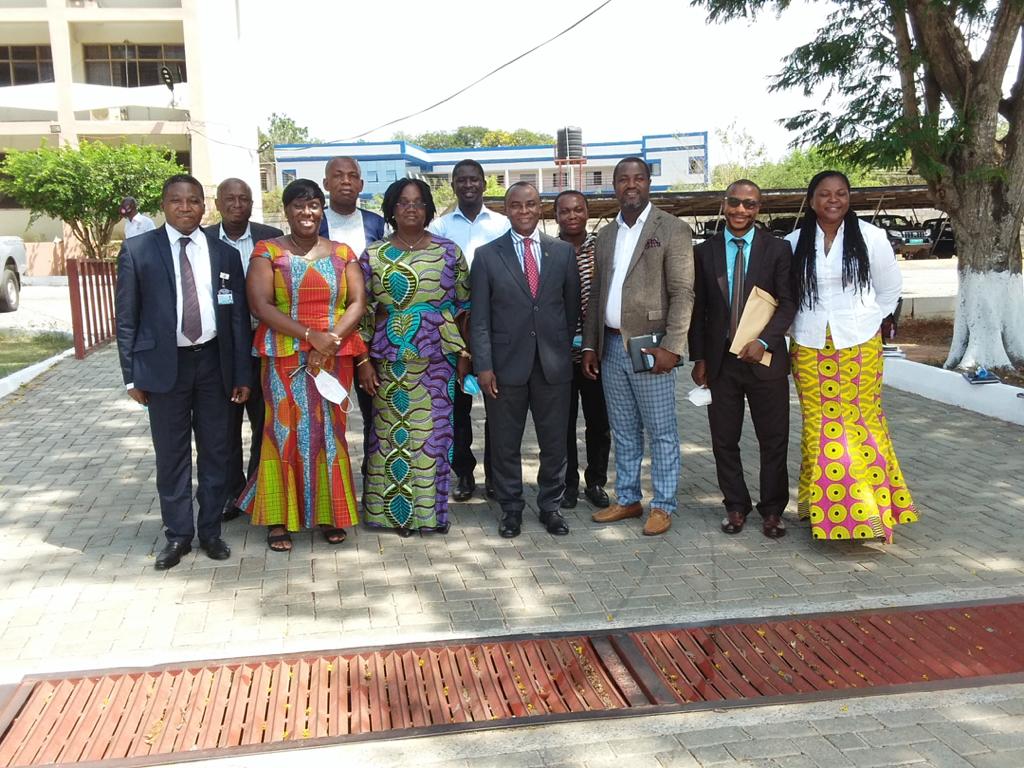 The Team was formed during a meeting between the UESD and CSIR on May 19, 2021 when a 7 member delegation from the former, led by Mrs. Mary Abena Agyepong, the Registrar, called on Management of CSIR. Mrs.

Agyepong, explained the visit was part of the University’s move to form partnerships with Industry and Institutions alike.

This, she said, is envisaged to ensure the University’ matches the growing challenges in environment and natural resources sustainability.

The Team’s core mandate shall be to ensure periodic review of the partnership and constant engagements between the two institutions which encompasses shared facilities and teaching partnerships, curriculum development, research collaboration and Internship.

The Team would be expanded to include Dr. Asenso Gyambibi, Director of Building and Roads Institute of the CSIR and one other person from UESD, when the Universiy’s third School, School of Built Environment comes into operation in the next academia year.

Mrs. Agyepong wanted an MOU to be signed between the two institutions to officially allow for partnerships in very important areas such as Agriculture, Water and Aquaculture, Climate Change, Water Resources and Material Sciences.

In the area of Agriculture, Mrs. Agyepong indicated that UESD has great interest in Food Security and Food Safety and the impact both have on poverty reduction.

She said, the UESD considers these two areas as very important and we would be glad to see both institutions forming a very strong alliance to enhance its realization.

On Material Science, Mrs. Agyepong said, UESD is very much interested in Waste Management and Soil Resources. She added that, Energy & Petroleum and Biomedical & Public Health are two other very important thematic areas that UESD is looking to venture into and would consider it an honour should CSIR come on board as partners.

The Head of Physical Development and Estate Management of UESD, Dr. Isaac Abbam said, the unique equipment on campus such as the AAS, CNS and Soil Test Machines gives an added advantage to the University to offer strategic assistance to the CSIR in terms of Soil and Water tests and other related tests.

Dr. Abbam offered to help if managers of the Centre needed assistance in the use of any of the equipment.

In responding to a concern raised by Dr. Wilhemina Quaye of the CSIR in the possibility for the formation of research collaborations in topical areas like Climate Change and Policy in relation to Gender, Dr. Michael Tuffour (Head of Department of Water Resources and Sustainable Development) said UESD has a Gender Studies Department which is endowed with experts in gender related issues.

He said the University is privileged to have experts in Climate Change, with these great minds at the disposal of both institutions.

He was confident that a collaboration would yield desirable results for both institutions and Ghana as a whole.

To buttress Dr. Tuffour’s point on Policy, Dr. Richard Amfo-Otu (Head of Academic Planning and Quality Assurance Unit of UESD), explained that Policy forms an integral part of the dealings of the University and so the CSIR should be rest assured that all dealings between the Centre and UESD shall be undertaken strictly in accordance with policy.

The Ag. Dean of the School of Sustainable Development, Prof. Anthony Amoah, adding his voice, said, the UESD already has a team specifically in charge of proposal writing and a special Unit called the Research Innovation and Consultancy Unit with a track record of preparing award winning proposals.
He said these two bodies are well equipped to collaborate with CSIR to take on any research tasks as may be agreed on.
The Director General of CSIR, Dr. Victor Agyemang, recounted the benefits the Centre has accrued, following its collaboration with institutions in similar areas.

Dr. Agyemang expressed the CSIR’s interest in the proposed collaboration and a periodic review of the partnership to be carried by the team.

He promised CSIR’s support towards the growth and development of the University in other many ways as may be considered necessary in future.

Other members of the UESD delegation were Prof. Edward Wiafe Debrah (Ag. Dean of the School of Natural and Environmental Sciences), Dr. Sam-Quarcoo Dotse (Head of Department of Sustainable Energy and Resources) and Dr. Daniella Delali Sedegah (Ag. Dean of Students).
From the CSIR, the other representatives included: Prof. Paul Boso (Deputy Director General of CSIR), and Prof. Mike Yaw Osei Atwereboana (Director of Water Research Institute of CSIR).