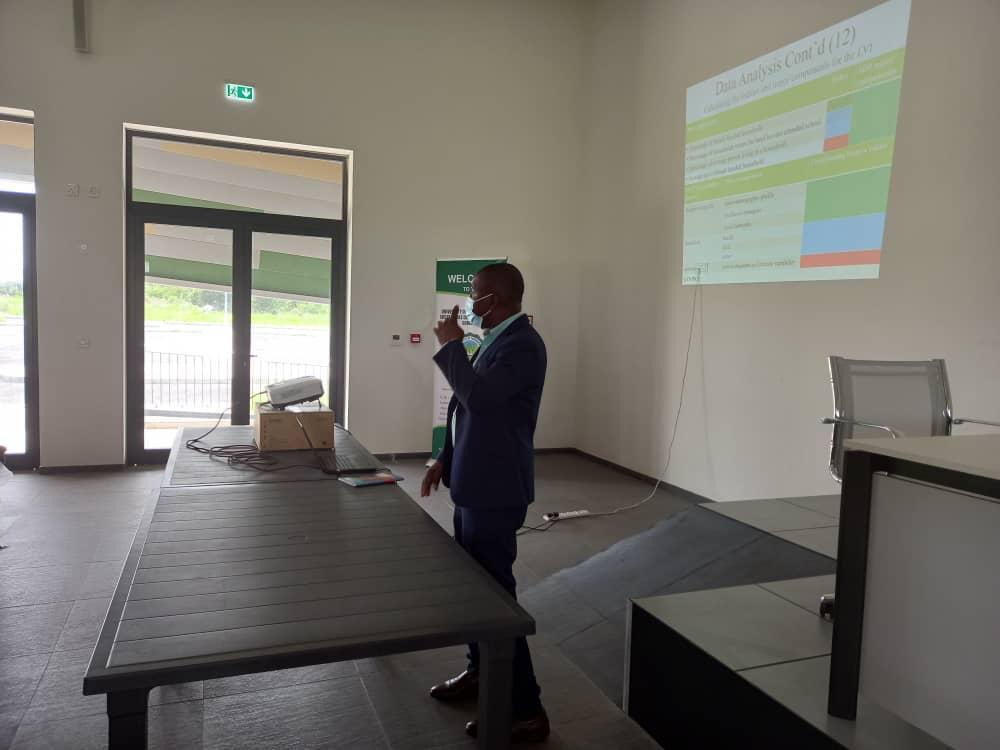 Increasing temperatures in the Nandom District of the Upper West Region have been identified as contributing to migration and loss of labour in the area.

This was contained in the findings of a study conducted by Dr. Ishmael Lente, a Lecturer of the School of Natural and Environmental Sciences, (SNES), of the University of Environment and Sustainable Development, in his presentation during the School’s maiden seminar series.

Dr. Lente’s topic was: “Nature of Rainfall and Temperature variability over Semi-Arid Ghana, West Africa: Gauge Observations and Perceptions of Smallholder Farmers in Nandom District”. He explained that the research was carried out to test, how the people of Nandom adapted to changes in temperature, (rain and sunshine), and how it affected their livelihood.

The study examined rainfall and temperature trends and variability, and how these were perceived by the study communities in their selection of livelihood. By this, he defined rainfall and sunshine as separate variables and sought to determine how they both interplayed, in terms of their variability.

He compared the rainfall and sunshine patterns in 1989, then 2010 to 2012, and how those temperatures affected the livelihood of the people. The study was also to test the perception that; the incidence of rainfall in the northern sector of the country was increasing.

The study was carried out at Nandom, in the Upper West Region, adopting both the qualitative and quantitative method of research, using 194 participants.

The researcher said, despite the divergence in the perception of the Nandom people with respect to rainfall patterns and temperature trends; they seemed to have agreed with the fifth Assessment Report (AR5) of the Intergovernmental Panel on Climate Change (IPCC) to the effect that heavy rainfall causes flooding which in most cases wash away premature crops and livestock. They also agreed that too little or too much rainfall at wrong times which affected crops and livestock may have resulted in food shortage, and this had not changed over the years.

They observed that changes in the temperature pattern led to poor crop yields, soil depletion, and loss of water from streams and rivers, loss of vegetation, invasion of alien species (weeds and insects) and health challenges.

The study also revealed that apart from the losses, the most serious was the migration of persons in these areas which automatically subjected the towns to loss of labour and workforce.

Dr. Lente among other things concluded that, for the nation to curb the rampant and unplanned migration situations from the Nandom District and its neighbours, government needs to educate the people more on the best livelihood adaptation strategies which will help them prevail over the rising temperature trends.

A Lecturer at the School of Natural and Environmental Sciences, (SNES), of the University of Environment and Sustainable Development, Dr. Seth AnimOwusu has stressed the need for the country to formulate rainwater management policies. This will lead to the adoption of modern technology for harvesting, treating and storing water for use.

Dr. AnimOwusu was making a presentation at a seminar organised by the School, where he disseminated findings on a research he carried out on three communities in the Eastern Region on rain water harvesting.

The research was on the topic: “Rainwater Harvesting (RWH) in Rural Communities: Primary Uses and Rainwater Quality.”   Dr. AnimOwusu explained, the research was to test how well rainwater was patronised in areas where access to water supply was limited and how to help promote rainwater harvesting in those areas.

The research was undertaken in three communities in three districts in the Eastern Region; Bunso Cocoa Quarters, Mensa Dawa and Nankese Adidiso, where the people who were in the low-to-middle income status bracket, had limited or no access to pipe-borne water supply and had a history of Rain Water Harvesting practice.

Dr. Anim Owusu said, he adopted the qualitative and quantitative research methods using forty eight, (48) respondents. Results showed that only 18 per cent of the respondents were actually practicing Rain Water Harvesting. It also suggested that a greater number of respondents, that is, 47% highly depended on boreholes while pipe borne water usage was 32 % and the rest on sachet and or bottled water.

The results revealed among other things that, rainwater was a good source of water for domestic purposes, especially, where access to public water supply was relatively difficult.

Also, about 83 per cent of the people considered Rain Water Harvesting as a more reliable means of consuming water.

Dr. AnimOwusu said, though his research pointed out some positive attributes of the users of rain water, the people had some reservations in terms of its colour and smell. These two factors made it challenging for them to use the rainwater for cooking or drinking without any form of contemplation and hesitation.

From the findings, Dr. AnimOwusu concluded that his research positively pointed to the fact that indeed rainwater is an alternative to pipe borne water supply and borehole water.

However, in order to ensure that increasing patronage for this alternative is realised, it is incumbent on government to consciously fashion out some strategies geared towards mechanised Rain Water Harvesting and educating the people on the simple means of harvesting and treating rainwater. He was of the view that, this has the tendency of relieving successive governments of the pressures of providing pipe borne water and drilling of bore holes in villages and communities.

His work also revealed that there were other benefits that Rain Water Harvesting promises and he urged managers of the country to as a matter of urgency; institute a national policy to consciously champion an all-purpose extensive study into the quantity of rains recorded annually, the annual rainfall pattern and rainwater quality and suitability for use.

He said this will help to design the most appropriate methods and technologies required to make Rain Water Harvesting a nationwide practice in order to reduce the overdependence on the public water supply system which over the years has proven to be erratic and unreliable.

One of the concerns raised by some of the participants was for the researcher to have interviewed residents who lived among the people but did not practice Rain Water Harvesting. This, they believed would have shed more light on why the practice is not popular in the rural areas where public water supply is considerablly limited.

There were presentations from four others: Dr. Owusu Fordjour Aidoo, Lecturer, at the Department of Biological, Physical and Mathematical Sciences of the School and Ms.ArabaKorsah, a Junior Assistant Registrar (JAR), with the Department of Geography and Earth Sciences.

Dr. Owusu Fordjour Aidoo’s work was on the topic, “Predicting the Potential Geographical Distribution of The Coconut Mite, Aceria Guerreronis Keifer (Trombidiformes: Eriophyidae)”. As an on-going project, he said the main aim is to study the trend of attack of the migratory Mite Pest that affects Coconuts.