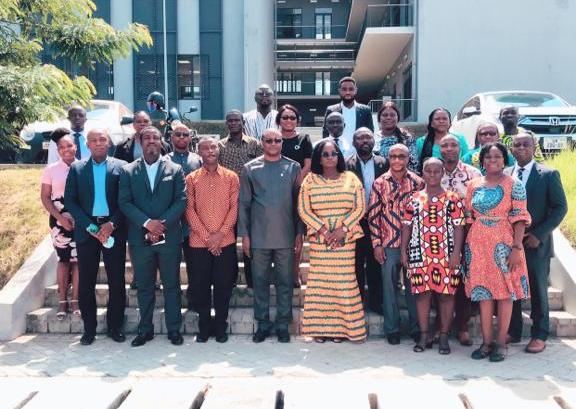 The Vice-Chancellor of the University of Environment and Sustainable Development,  UESD, Prof. Eric Nyarko-Sampson has  drummed  home  the need for the core values of the University to be instilled in the students  and  the University community as a whole, as the institution advances.

He explained that the core values acronymed HOPE, which stands for Honesty, Opportunities, Perseverance and Enterprising, is a strong  ‘overwhelming desire’ of UESD to roll out graduates who would ‘provide or serve’ as light, in especially a country where a gloomy future is predicted for the future.

Prof. Nyarko-Sampson was delivering a speech at the inauguration of a sixteen­ member Committee of the University’s HOPE Road show at a cerembny in the Multipurpose Auditorium. It was attended by Members of Management as well as the teaching and non-teaching staff. .The sixteen-member team has representatives from the various Units, Directorates and Unions of the University.

It has as Chairman, Dr. Michael Larbi Odame, a Lecturer of the School of Sustainable Development, (SSD), Vice-Chairperson; Dr.Theodora A. Asamoah, a Lecturer of the School of  Natural and Environmental  Sciences  (SNES)and  Ms. Rita Adwoa Boateng as Secretary. Their terms of reference among other things involve organising conferences, workshops that have the touch of the HOPE agenda, planning daily programmes, seeking sponsorship for the programmes. It is expected to submit a proposal of activities with budget to  the Vice-Chancellor by the 31st of December, 2021.

The  HOPE  Road  show is  part of the ‘strategic’ vision  of Prof.  Nyarko-Sampson as the Vice-Chancellor of the UESD.

Prof. Nyarko-Sampson explained that due to the current happenings in the world, with the get-rich syndrome gaining currency among the youth, there is the urgent

need for a conscious effort to redirect the attention of the population which has majority as youth, to frown on such unhealthy attitudes.

He said, this is why the  UESD hopes to produce graduates  who  would  ‘exude hope and can offer hope,’ and this is encapsulated in  Honestyoung  men  and women, who would be able to identify opportunities around them or create same using the potentials in their environments: Perseverance on the premise by Henry Longfellow that, ‘Heights by great men reached and kept were not attained by sudden Hight, but they while their companions slept were toiling upward in the night,’ and become Enterprising by making a living from the Opportunities they have, becoming their own employers.

Prof. Nyarko-Sampson indicated that the HOPE agenda is not only  for  the students of the UESD but for staff members  as well. It is an agenda, which would be vigorously pursued to incorporate it in all activities of the University, such as workshops, conferences and the seminars. ‘It  should be a lifestyle here in UESD, our DNA.’ he added.

The Vice-Chancellor expounded that members of the Committee were carefully selected with representatives of all offices on campus whose activities have a direct bearing on  the activities of the  programme, while some were selected based  on what they bring to the table.

He emphasised that the HOPE agenda is  the  responsibility  of  the  entire University Community and itrequires a conscious effort to integrate the tenets of ‘HOPE’ in ‘our working culture.’ Dr. Odame called for unity and  cooperation among his team members and the support  of  the University  Community  as  a whole as they execute their functions.