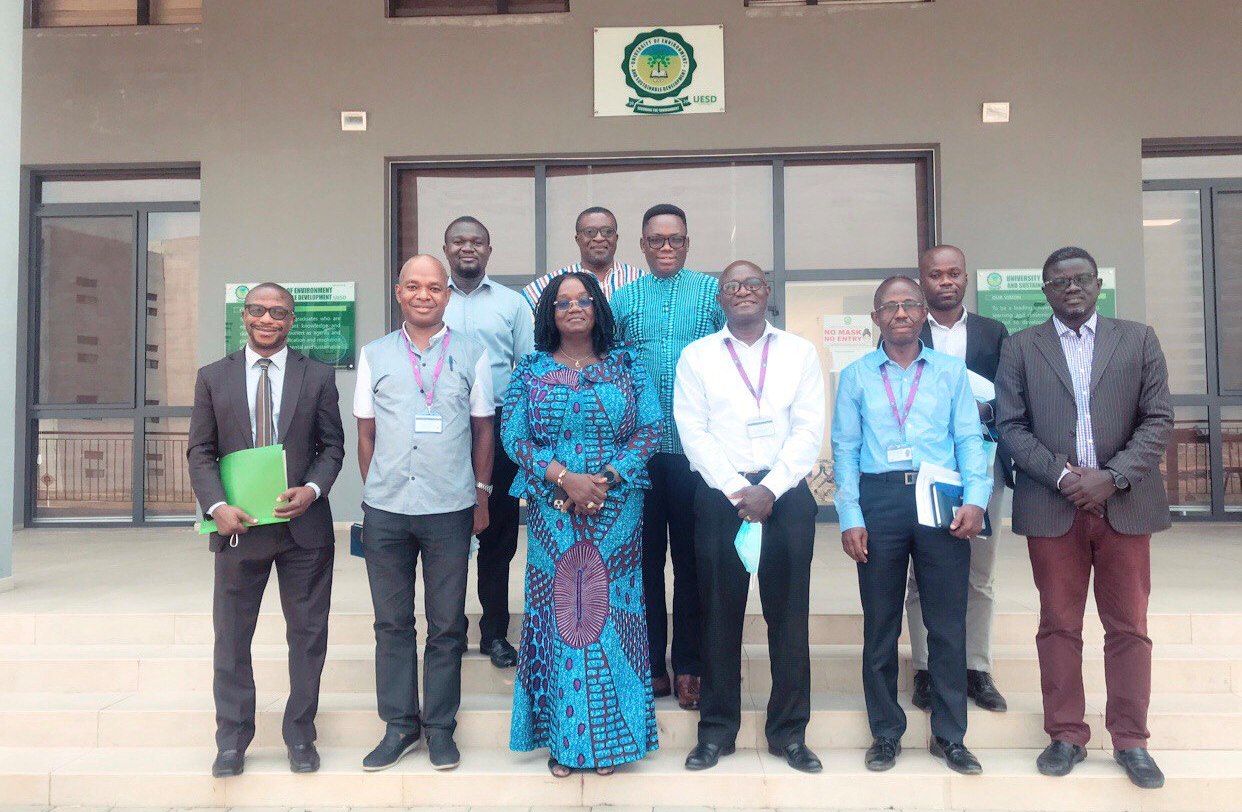 The University of Environment and Sustainable Development, (UESD) has begun talks with the Volta River Authority, (VRA)to sign a Memorandum of Understanding to officially regularize collaborations between the two institutions.

This came up during a meeting when a five-member team from the VRA in the Manya Krobo Municipality in the Eastern Region called on the Management of the UESD at its campus in Somanya.

They were received by the Registrar, Mrs Mary Abena Agyepong, and some Senior Members of the University.

The leader of the delegation, Mr. Benjamin Arhin Sackey, the Director of Environment and Sustainable Development, explained that the purpose of the visit was to finalise a draft MOU document with the UESD.

He said, under his unit, there is also the Environment and Social impact Section that manages aquatic weeds and plant biodiversity. Mr. Arhin Sackey indicated that, in its quest to find a solution to the aquatic weed challenge, the VRA sponsors Masters and Ph. D candidates to research the proper ways of managing the weeds.

He continued that the unit is also involved in water quality and disease control under Public Health. It is also venturing into paper, plastic, and waste recycling.

He stated that, similarly the EPA had begun operations into Green House Gas emission calculations. He reinforced the importance of the collaboration between both institutions and indicated VRA’s full commitment to seeing to the realization of the MOU.

Adding to Mr. Arhin Sackey’s submission, the Manager of Environment and Social Impact of VRA, Mr. Ocran- Hammond, explained that his section’s role is to mitigate challenges emanating from VRA’s areas of operation.

The Manager of the Public Health section of VRA, Dr. Michael Dade, said, his section is primarily in charge of developing and adopting various measures for treating schistosomiasis (bilharzia) which is one of the most prevalent parasitic diseases within the entire water base, spanning Ada to the Northern sector of Ghana.

He said, VRA has made futile efforts in eradicating the disease but was confident that through students’ in-depth research, a lasting solution may be achieved to halt the recurrence of the disease.  Dr. Dade stated that VRA financiers now place a stronger emphasis on power production which ensures environmental sustainability rather than focusing on megawatts generation and this has significantly shaped VRA’s focus on environmental sustainability.

In his submission, the Dean of the School of Natural and Environmental Sciences(SNES), Prof. Wiafe Debrah said, due to the common interest both institutions share in the area of training and practice, it would be proper if they regularize their relationship to enhance mutual benefits.

Correspondingly, VRA could admit the students of UESD for practical training and internship to give them hands-on experience in their various fields of study and ultimately improve their competitiveness in the job market. On the reverse, the VRA can have three main benefits: offering expert advice to VRA, and organising in-service training to VRA staff members on the modern trends of monitoring forests.

The Registrar, Mrs. Mary Abena Agyepong, expressed her excitement about VRA’s response to the proposal and expressed optimism that, such collaborations would bring about mutual benefit for both institutions.

She stated that the programmes run squarely fit into the areas of operation of VRA and all things equal, the collaboration would certainly pay off for both parties.

She expressed confidence that the UESD would be able to come out with a lasting panacea for VRA’s schistosomiasis problem which seems to be recurrent. Also, Lecturers under the WASH programme can combine efforts to get a lasting solution in that regard.

Mrs. Agyepong expressed disappointment that waste collection companies do not segregate their waste for easy disposal of rubbish. She revealed that the University, in its bit to practice ‘’proper’’ waste management, has labeled the bins at the waste disposal sites situated at vantage sites on campus.

Mrs. Agyepong concluded that the University has state-of-the-art facilities and well-equipped laboratories which would enhance all teaching, learning, and research activities. She said UESD is composed to make the collaboration a reality.