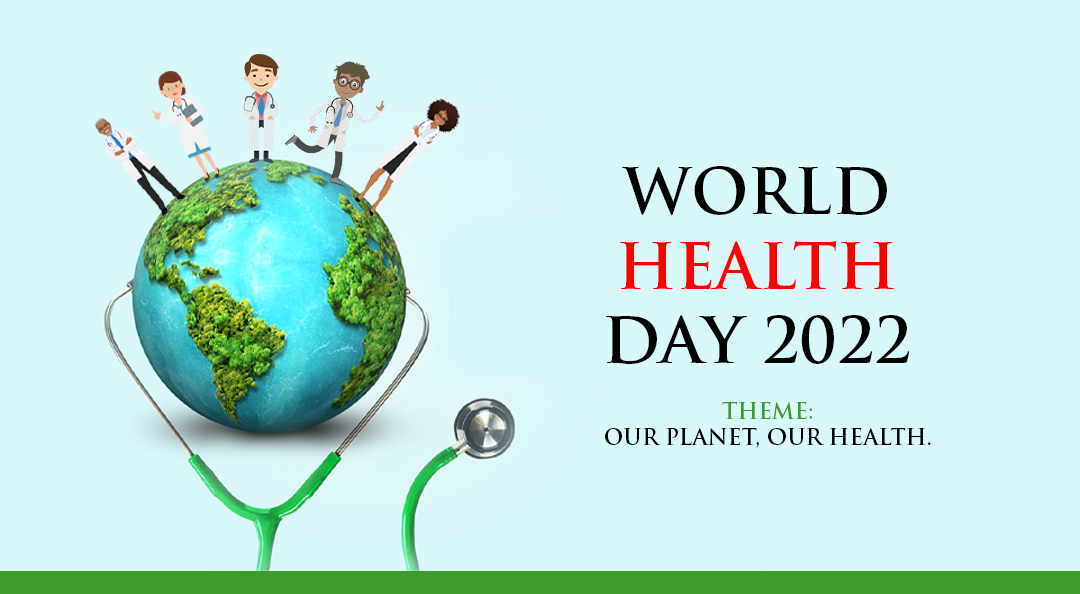 THEME: Our Planet, Our Health

World Health Day is a global health awareness day that aims to create awareness of a specific health theme to highlight a priority area of concern for the World Health Organization. This year’s World Health Day is on the theme: “Our Planet Our Health”. This is timely as we focus the global attention on urgent actions needed to keep humans and the planet healthy and foster a movement to create societies focused on well-being in the midst of a pandemic, a polluted planet with a lot of man-made destruction of the environment and its related increases in environmental associated diseases such as cancers, asthma, malaria, schistosomiasis, soil-transmitted helminths, and other chemical-related illness. W.H.O estimates that more than 13 million deaths around the world each year are due to avoidable environmental causes. This includes the climate crisis which is the single biggest health threat facing humanity. “The climate crisis is a health crisis”. There are several actions in Ghana that destroys the environment and has a negative effect on our health. Some of the issues are as follows: Environmental health and e-waste: The dumping and burning of e-waste such as user television sets, old computers, and fridges. These contain metals and chemicals known to harm human health such as mercury, lead, cadmium, and polybrominated flame retardants. Plastic waste disposal is a major concern. Indiscriminate disposal of waste including plastics in drains has resulted in blocked drains and flooding which increased the prevalence of malaria and diarrhoea. Recycling of plastics is recommended or the use of paper bags in shops instead of plastic bags. Multinational and illegal mining also pose serious environmental and health challenges in Ghana due to the chemical pollution of water bodies, land degradation, and air pollution. Air pollution leads to several health problems such as respiratory disease due to the air pollution and the contamination of the water bodies with toxic chemicals used for mining such as mercury which can affect the human brain, spinal cord, kidneys, liver and have long term effects such as personality changes, stupor, and coma. The small-scale illegal mining practices have polluted most of the water bodies in the country heavily that water treatment is no more cost-effective, and most communities have lost the source of their drinking water and killed most of the aquatic life. Secondly, with the large-scale multinational mining companies, though the mining laws of Ghana require that mining companies conduct environmental impact assessments before commencing operations and reclaim all lands after mining activities, evidence suggests that these lands are hardly reclaimed. This leads to displacement of farming communities leading to food insecurity. The uncovered pits become death traps for community members who may fall into them. Chemical Pollution in the ocean is also a major environmental hazard. This occurs mainly by man-made pollutants such as pesticides, herbicides, fertilizers, detergents, oil, and industrial chemicals. These are usually released into the environment far upstream from coastlines. As it rains, these chemicals are washed into rivers, then into the waterfalls, and into the ocean. When a toxic waste harms one organism, it can end up destroying an entire food chain of aquatic life including humans who feed on the seafood. Climate change and our health: Climate change is a change in the world’s weather systems that occurs over decades. Most of the recent changes in our climate have been brought about by human activity. Effects of climate change include increasing air and sea temperatures, changes in rainfall patterns, more frequent and increasingly severe extreme weather events, and sea-level rise. This leads to a worsening of air quality and changes in the spread of infectious diseases resulting in emerging and re-emerging infectious diseases. It also poses a threat to food and water quality. Protecting the environment means keeping the planet as well as mankind safe. One of the major contributing factors to the degradation of the environment is the lack of knowledge on environmental issues by the population and inadequate capacity/ workforce in the agencies responsible to protect the environment. The University of Environment and Sustainable Development (UESD) is building the capacity of Ghanaians in Environment and Public Health, and providing environmental education to ensure the needed manpower to protect the environment to safeguard the well-being of the population. Let us be encouraged on this year’s World Health Day and beyond to pay attention to your health by protecting the environment and keeping the planet safe for man.