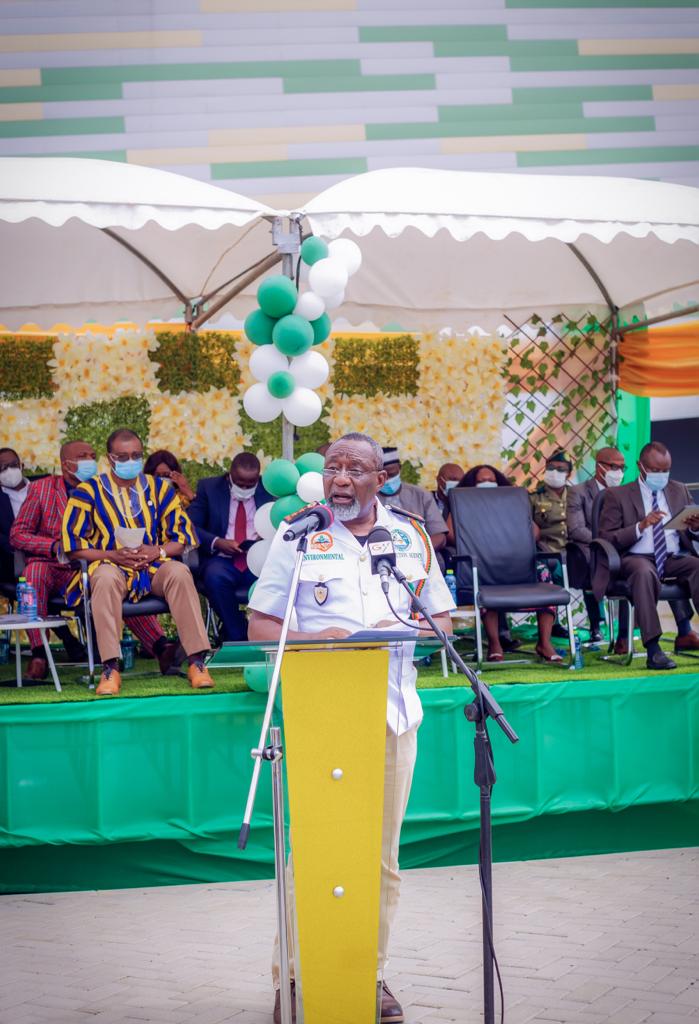 The Executive Director of the Environmental Protection Agency (EPA), Dr. Henry Kwabena, Kokofu says if Ghana wants to make significant strides in the fight against climate change, its mitigation and adaptation actions should be formulated in line with indigenous methods and practices which have been handed down from generations.

He explained that these ‘old methods’ of our forebears have played significant roles in the grand scheme of protecting the environment with the unscientific measures they adopted.

Dr. Kokofu who is a legal practitioner and the former MP for Bantama in Ashanti was delivering a lecture as the guest speaker at the second Commencement lecture of the University of Environment and Sustainable Development, (UESD) on Saturday, 15th January, 2021 at the forecourt of the Multi-purpose Auditorium of the University.

The Commencement lecture which was held to usher in the 2021/22 Academic Year, focused on: ‘Securing the Environment-The role of the University in mitigating climate change.’

It was attended by the Council Chairman, Management and members of the University community and the newly admitted and continuing students of the institution. Also present were representatives from the security services in the Municipality, officials of the CSIR, EPA and some traditional leaders of the Lower Manya Municipality.

Dr. Kokofu’s thought-provoking lecture touched on the ravaging effects of climate change and afforded some adaptation measures to mitigate the effects.

The astute lawyer held that the two industrial revolutions which took place within the 18th and the 20th centuries saw a lot of the advanced nations taking centre stage in the development of heavy duty machinery which emitted gases and chemicals into the atmosphere.

He intimated that, many years down the line, the consequences of these activities have caused climatic disruptions,  resulting in global warming, floods, drying of water bodies, and excessive sunshine and mitigating these effects has been challenging.

Dr. Kokofu noted; ‘the recent Intergovernmental Panel on Climate Change(IPCC) report, which cautions us about a looming rise of temperature by 1.5 degree Celsius, is enough conscious awaking for the global community’s conscience to tackle climate change head-on, given that we only have twelve (12) years to stop a catastrophic climate change.’ This revelation, the guest speaker noted is nerve-wracking.

He quoted statistics from the IPCC which indicate that, more than 30 years of climate records in Ghana show that; the “average temperatures are likely to increase by at least 30C by 2080 worldwide.”

He again revealed that the Savannah Regions are likely to record temperatures above 300C. He continued that, over the past five decades, twenty-two (22) major hydro-meteorological events in Ghana have affected sixteen (16) million people with more than 400 deaths. This suggests that more than 50% of Ghana’s 30 million people are already exposed to the climate change effects. He said, all these culminate in the excessive climatic fluctuations experienced across the globe.

The disturbing revelation the guest speaker noted was that, the less developed countries are bearing the brunt of the climatic change-related issues.

He therefore, agreed with President Akuffo-Addo’s position on the COP26 Glasgow, Scotland, 2021 where he pushed for the developed nations (who are the major culprits in the climate disruptions), to as a matter of responsibility, contribute to the financing of the fight against climate change in the affected countries.

Dr. Kokofu said, despite Ghana’s socio-politico-economic challenges, it plays a significant role in the fight against climate change. “We believe that acting on climate change must be a shared responsibility with coordinated efforts weaved into the sustainable development agenda of nations. The Paris Agreement and the UN Sustainable Development Goal (SDG) 13 have paved the way for us to forge in this direction. And as such, the formulation of our nationally determined contribution to the Paris Agreement already aligns with the medium-term development plan-an agenda for jobs,” he stated.

To address the adverse effects of climate change, Dr. Kokofu recommended some measures including, lowering deforestation and restoring the ecosystem, making conscious efforts to promote the generation of renewable energy to avoid depending heavily on fossil fuels, encouraging citizens to consider sustainable production and consumption of goods and services which have negative impact on the environment and exploring alternative waste management strategies that will safeguard  the  proper disposal of waste.

Dr. Kokofu proposed; focusing on ‘climate-smart agriculture’ where farming is specifically designed based on the climate change patterns, Instituting coastal protection systems to monitor the coastal Regions,  giving early warning systems and also provide climate services to the coastal folks and setting up ‘climate-proof  infrastructure’ that will be resilient to climate variations and its associated ravages.

The guest speaker emphasised that the fight against climate change goes beyond training in academia.

He said, even though, ‘our’ forebears had no formal education, nor did they have professionals or specialised agencies like the EPA or the CSIR to manage the environment, they were still able to adopt primitive but very cogent measures to address climatic adversity and this has proven to be effective over time.

He encouraged policy makers and institutions of higher learning, particularly managers of the University of Environment and Sustainable Development (UESD), to as a matter of importance, always refer to their curriculum to ensure that as a specialised University mandated to train graduates to be the human resource to tackle environmental challenges head-on, the courses and programmes designed contain some indigenous practices on the environment, aligned with the beliefs and practices of the indigenes for the students to imbibe.

Dr. Kokofu said, climate change is another pandemic in waiting, “this is the time to tackle and win battles against it”. The EPA boss indicated that he is in talks with his management team to establish a Regional office of the Agency in the Eastern Region to foster the collaboration between it and the UESD.

This will also offer students of the University the opportunity to undertake their internship with the agency.

The chairman for the lecture, Prof. J.N. Ayertey, who is the Council Chairman for UESD, tasked the Dean of Students of the UESD to form discussion groups and debate on the major issues Dr. Kokofu raised in his presentation.