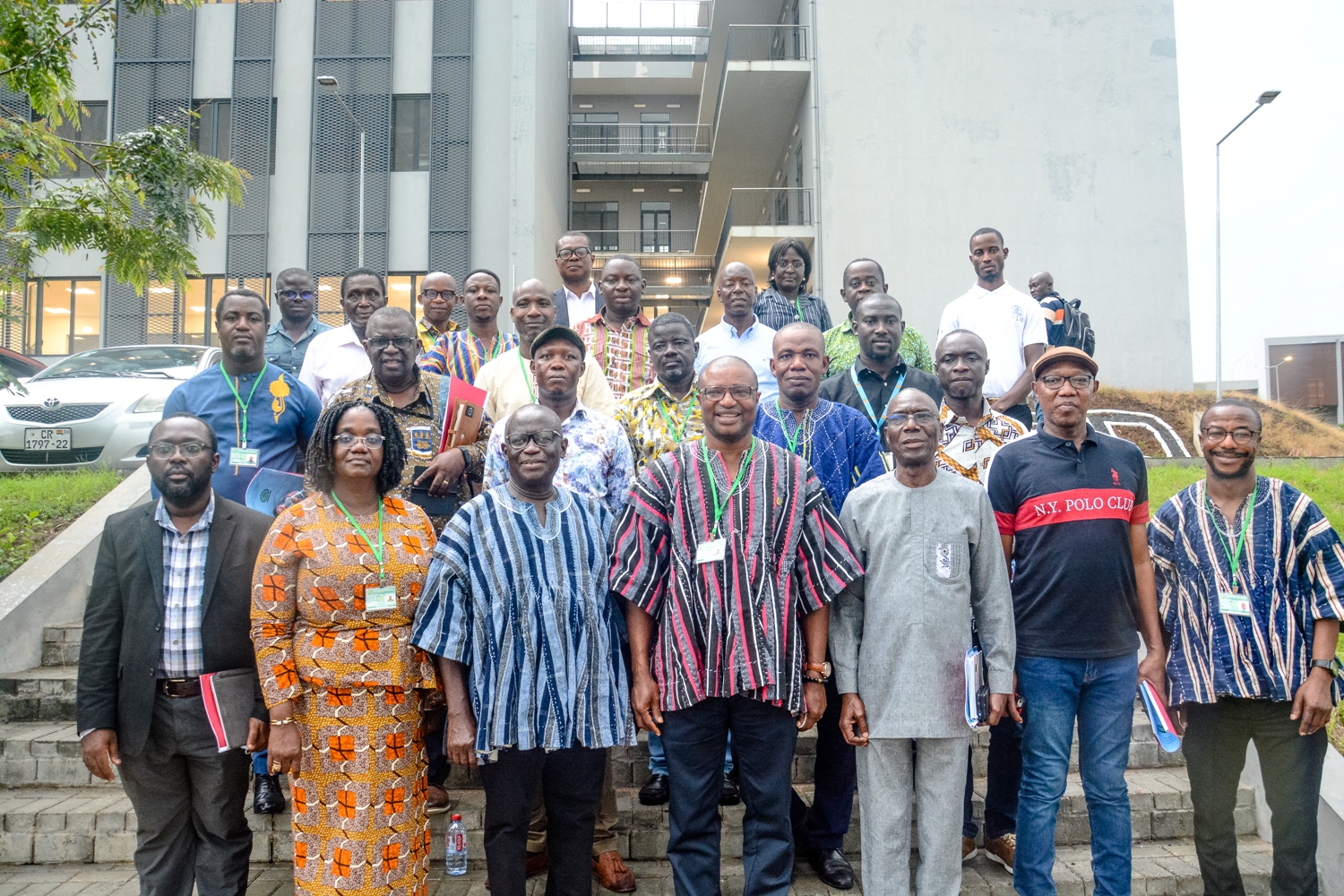 Some members of the Parliamentary Select Committee on Education visited the campus of the University of Environment and Sustainable Development, (UESD) in Somanya, the Eastern Region, on Friday, 7th October, 2022 to inspect the progress of work of GETFund projects there.

Led by the Chairman of the Committee, Hon.Kwabena Amankwa Asiamah, MP for Fanteakwa North, the eleven member-team was met by the Vice-Chancellor, Prof. Eric Nyarko Sampson, together with the Pro-Vice-Chancellor, Prof. Edward Wiafe Debrah, the Registrar, Mrs Mary Abena Agyepong, the Directors of the Departments, Unit Heads and some Senior Members, in the Auditorium, Multipurpose Building where they held a meeting, after which they were shown round the GETFUND projects.

Present was the Consultant for the GETFund projects, Mr. Daniel Dotse and the contractors.

In an introductory remark, the Chairman of the delegation, Hon.Kwabena Amankwa Asiamah told the Vice-Chancellor that, the GETFund projects fall under the purview of the Education Committee and the Members are therefore on their rounds to inspect the state of projects in tertiary institutions including UESD. The visit to the UESD was for them to get first find hand information on the progress of work on campus and also have a look at projects being sponsored by other companies, to enable the Committee to make its report to Parliament.

Prof. Nyarko-Sampson extended a warm welcome of the team to the University. He briefed members on the activities of the University since it started operations a little over two years ago.

On the GETFEND projects, Prof. Nyarko-Sampson stated that, there are three projects started in 2015 and are at various levels of construction, but work has stalled due to funding issues.

The projects under construction are; an auditorium, Administration, and lecture hall.

Prof. Nyarko-Sampson told the Hon. Members that, there are two projects under construction on campus apart from the GETFund projects. These are the Phase II of an EPC contract which is to complement the facilities on campus. He explained that, the project is a recreational facility that comprises a football field, hockey pitch as well as basketball and lawn tennis courts. The other, is the construction of an additional laboratory, faculty block , and accommodation for staff members.

On programmes run in the University, Prof. Nyarko-Sampson, told the Hon Members that the University is presently running twenty-two (22) Bachelor of Science programmes, B.Sc., accredited by the Ghana Tertiary Education Commission, GTEC, and it is currently operating two out of its five Schools, that is; the School of Sustainable Development, SSD and the School of Natural and Environmental Sciences, SNES, and indicated that a third School, the School of Built Environment will be added in the next academic year.

Prof. Nyarko-Sampson said, the University has two streams of students, levels 100 and 200. He indicated that admissions for the 2022/23 academic year are underway amidst the introduction of the University’s initial Sandwich programme, beginning Monday, the 24th of October to the 22nd of December. He maintained that the University is bent on sticking to its mandate.

Highlighting the relationship between the University and its communities, the Vice-Chancellor said, as a university, it has engaged with its communities and through the Community Engagement and Projects Innovations Unit, CEPIU, it has held forums for farmers in the communities on climate change and held a Community Challenge Award for learners in some basic schools.

After the Vice-Chancellor’s submission, he then invited the Director of the Department of Physical Estate and Management, (DPDM) Surv. Dr. Isaac Abbam to make a PowerPoint presentation on the state of the University and the GETFUND projects.

The outline comprised the auditorium, administration, and lecture hall. He explained that the contract was awarded on 10th November, 2016 and work began on June 2017 due to some issues with compensation, the project resumed on August 13, 2018, after a two-month break. Dr. Abbam explained that the issue with the fixed contract is that when the expiration period elapses, the rates are reviewed before the contract can be continued. However, this was not done and this led to a lot of challenges hence the suspension of work.

Responding, the Chairman of the Committee, Hon. Amankwa Asiamah said, he was impressed by the Vice-Chancellor’s submission and the serene nature of the campus. He advised management to stick to its mandate. The call was reinforced by other members of the team.

On the GETFUND project, the chairman questioned the contractor about the reason for the discontinuity in construction, the contractor responded that the suspension of the construction work has to do with the challenges of funding. The discussions continued after which the Vice-Chancellor led the team to inspect the three GETFund projects.

The Chairman of the Committee, the ranking member, and the Vice-Chancellor gave their general impressions after the inspection.

The Chairman of the Committee, Hon. Kwabena Amankwah Asiamah reiterated that the Committee’s visit was to assess the ongoing GETFUND projects and to make recommendations for future projects. He said, he was thrilled with the level of cooperation between the Vice-Chancellor and his team and called for continuous collaboration among workers and management.

Hon. Amankwah Asiamah said, he was impressed with the work done so far but expressed concern at the size of the 2nd auditorium under construction. He said, the auditorium could be converted into a lecture theatre while the Committee lobbies to get a bigger auditorium for the University.

He also pledged to lobby for work to be expedited on the GETFUND projects and for new ones to be brought on board. He said, the growth in the student population calls for additional lecture blocks and hostels in order to cater for the growing numbers. Amankwah Asiamah said, although UESD is one of the youngest institutions in the country, he is encouraged by the projects ongoing.

It was his hope that the projects would be completed before the Members next visit.

For his part, the Ranking Member on Committee for Education and MP for Akasti North Hon. Peter Kwasi Nortsu-Kotoe said, being part of the Parliamentarians who worked on the bill that created the University, he will lobby for the completion of the project in order to ease learning for students on campus at UESD.

He was excited about the GETFUND projects on campus but was unhappy with the slow pace of work there. He was particularly happy with UESD’s core mandate of protecting and securing the environment and urged the Management not to veer off its core mandate.

The Vice-Chancellor, Prof. Eric Nyarko-Sampson said, he was delighted by the visit of the members of the Parliamentary select committee on education. He, therefore, hoped that they would lobby for the projects to be completed and new ones brought on board.