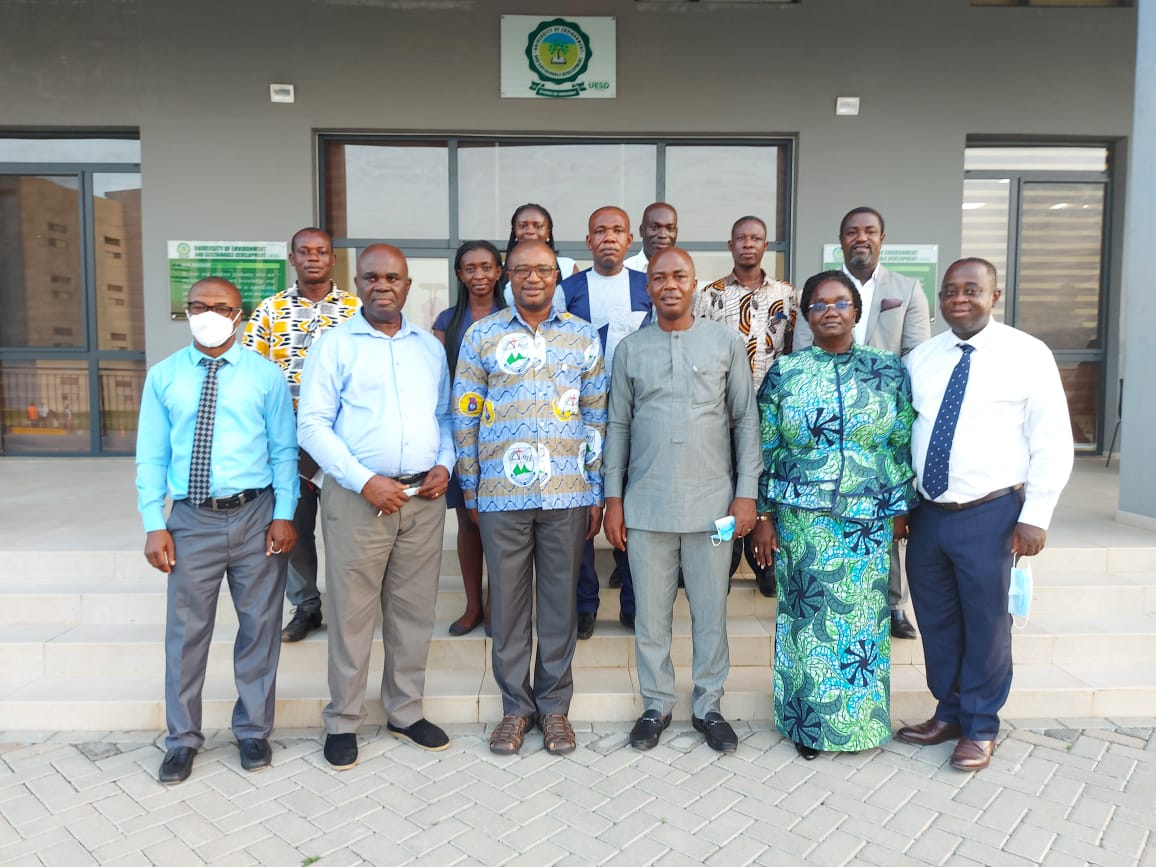 The newly appointed Municipal Chief Executive (MCE) of Yilo Krobo, Hon. Eric Tetteh, has called on the Management of the University of Environment and Sustainable Development, (UESD) to formally introduce himself as the new political Head of the Assembly. He was accompanied by the Municipal Chief Director and some officials at the Assembly. Hon. Tetteh takes over from Mr. Ebenezer Tetteh Kupualor.

The Vice-Chancellor, Prof Eric Nyarko-Sampson and some members of Management of the University welcomed the new MCE.

Prof. Nyarko-Sampson gave a brief account of the UESD and what the institution has done since it started operations in January, 2020.  He spoke about the Programmes being run in the University, the Admissions, Lectures and other activities on campus. Prof. Nyarko-Sampson told the MCE that currently, the University is processing admissions for the 2021/22 academic year being spearheaded by the Admissions and Academic Unit.

On projects for the campus, the Vice-Chancellor stated that construction for phase two of the University will soon begin.

Prof. Nyarko-Sampson indicated that the UESD is available to collaborate with the Municipality in the area of research and also having Lecturers serving on the various Committees at the Assembly.

The Vice-Chancellor informed the MCE of the University’s engagements with surrounding communities in areas connected to their livelihoods like mango farming and beads making through its Community Engagements and Projects Innovations Unit, (CEPIU). He expressed the hope that the relationship between the UESD and the Municipal Assembly will grow stronger.

The Director of the Department of Physical Development and Estate Management of UESD, Dr Isaac Abbam, appealed to the MCE, to support the University to address its security needs. He said, the University has put up a mast to boost signal strength in the area that covers about 20km in radius.

Responding, Hon. Tetteh expressed delight in the submissions made and assured Management of the University of the Assembly’s support in the requests made.  He said, he was concerned about the level of education of the youth in the Municipality which is mainly at the JHS level. He attributed the situation to the lack of financial support to further their education.

Hon. Tetteh was confident that the presence of the UESD would help turn things around for the better and improve on the level of education in the Municipality. He was also hopeful that through the activities of the University’s CEPIU with the people, it would improve on their livelihood and the Region as a whole.

He said, he was going to count on the resources from the University to assist in the areas of research ideas to help the Municipality in farming and the proper ways of handling agro chemicals among the farming communities.

The Registrar of UESD, Mrs. Mary Abena Agyepong, expressed appreciation to the MCE and his entourage for the visit and prayed for a good working relationship with his team.

In a related development, personnel of the Community Engagements Projects and Innovations Unit, (CEPIU) and other members of staff of the UESD over the weekend joined the chiefs and people of Plao in Somanya in a cleanup exercise towards the celebration of their annual Kloyosikplemi which will be climaxed on Sunday, the 21st of November, 2021.

The cleanup which started from the Akuse lorry station popularly referred to as round about, (a major landmark in the community) to the Akutunya lorry station was organized by the Yilo Krobo Traditional Council. They swept the streets, cleared bushes and desilted some gutters in the township.