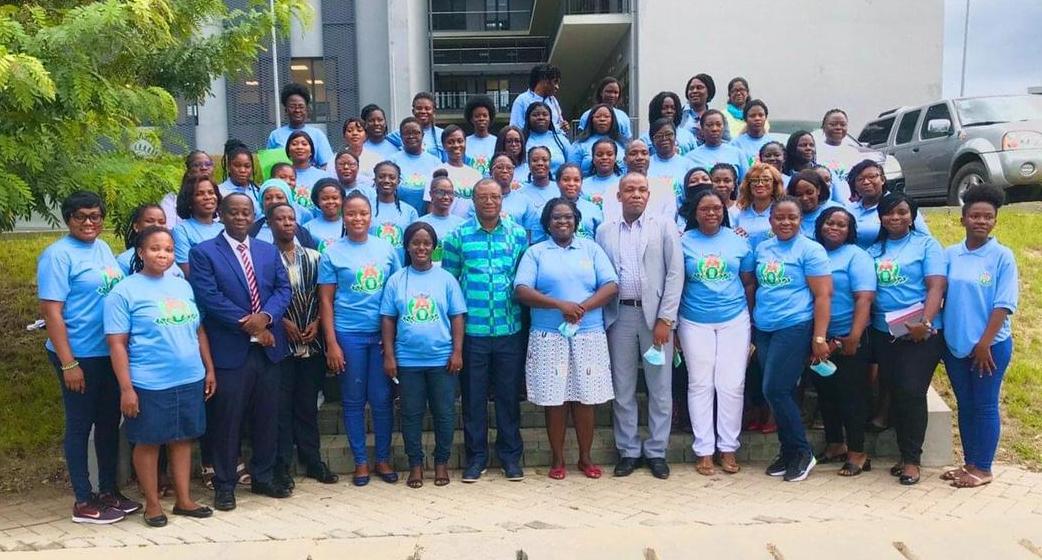 The Vice-Chancellor of the University of Environment and Sustainable Development (UESD), Prof. Eric Nyarko-Sampson has challenged the female staff of the University to endeavour to stand out, persevere and take opportunities that come their way. This, he believes will facilitate their growth.

Prof. Nyarko-Sampson threw the challenge when he launched the UESD Ladies Club and Inaugurated its twelve-member (12) Executive. The Club which has the motto: ‘Empowered to stand out,’ has Ms. Alberta Ablometi as President and Ms. Linda Neequaye as the Secretary. It was attended by the University Community including the Registrar, Mrs Mary Abena Agyepong, some management members the patrons of the club and students.

Prof. Nyarko-Sampson who is the brain behind the formation of the Club stated that the motto, empowered to stand out, is appropriate and an ideal tool for the engine of growth. This is because when one is empowered, she is able to standout without fear of failure and will be able to persevere to greater heights.

He expressed the hope that the vision of the Club would be fully realized and manifested in the lives of members to reach their full potential. He also urged the executives to identify ways to support young women within the Club and the University community as a whole through mentorship, skills training, seminars, workshops and symposia.

Prof. Nyarko-Sampson underscored the power of women when they come together as a group. He said, like a strong hurricane, female groups sweep the surface of the earth with remarkable results beyond imagination.

He however conceded the difficulty associated with maintaining clubs of such nature. He said forming clubs take great effort but staying together in that Club requires greater responsibility from both the executives and members. Prof. Nyarko-Sampson, therefore, encouraged the executives to do all it takes to build and get the group growing.

The President of the Club, Ms. Alberta Agblometi, on behalf of the executives, pledged to work assiduously to bring out the best in the members. She called for the unwavering support of the University community for the club. There were solidarity messages from the unions on campus, made up of UTAG, GAUA, SSA and TEWU.

The guest speaker, a counsellor at the Teachers Education Department, University of Ghana, Rev. Dr Phyllis Kwarteng Donkor, spoke on, ‘the complete woman in the 21st century.’

She said, the 21st century is the century of technology, unlimited and abundant information, distractions and opportunities. The woman of today must therefore position herself in this era to maximise opportunities and eliminate distractions.

Rev. Dr. Donkor stated that every human being has a purpose on this earth and the first thing is to appreciate their worth as women, and discover their purpose and that will bring them fulfilment.

Rev. Dr. Donkor who is also a Reverend Minister at the Christ the King Methodist Church, Akweteyman Circuit Accra, spelt out some attributes the 21st-century woman must possess: she must be smart, build emotional resilience, learn to be content and happy and avoid being slaves to social media.

She stated that women should avoid comparing themselves to what they see on social media because the platforms are distractions and are ‘killing’ homes. She urged the members of the club to take their spiritual lives seriously and grow.

There were song ministrations by the UESD Choir and soloist, Ms Agnes Birago Adu Sarpong of the University Relations Unit. A memorable cake was cut to climax the launch of the ladies club.