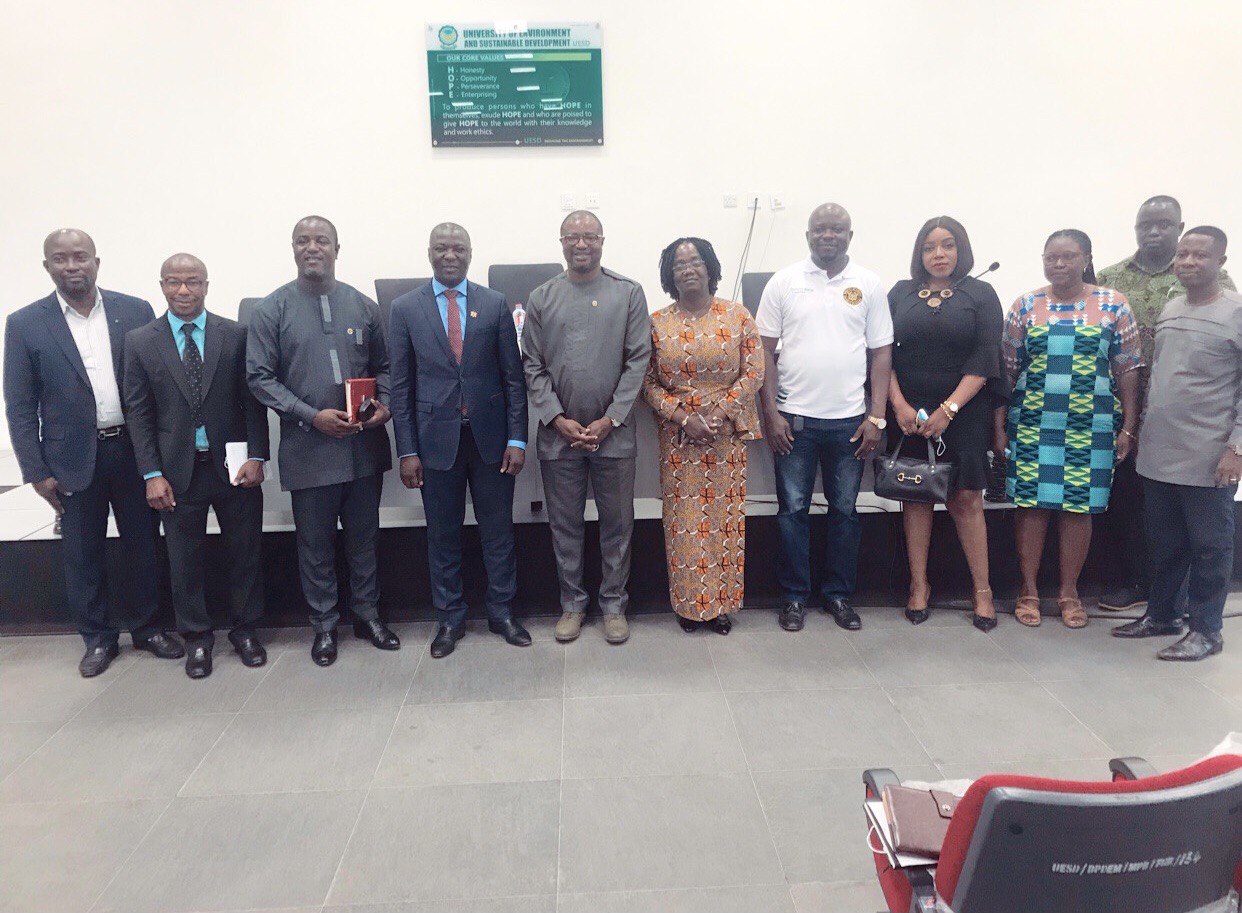 The Deputy Minister of Energy in charge of petroleum, Hon. Mohammed Amin Adam has revealed that the government has rolled out plans to shift from the use of fossil fuel into the adaption of clean energy sources. It will also install mini-grids in areas in the country that are not connected to the national grid.

The workshop, on the theme “ENERGY TRANSITION IN GHANA: POLICY OPTIONS,” was held at the Multi-purpose Hall of the University. It was attended by the Vice-Chancellor, Prof. Eric Nyarko-Sampson, who was the chairman for the occasion, the Registrar, Mrs Mary Abena Agyepong, the Director of Finance, Mr. Baffuor Awuah Kwabi, members of Management and faculty as well as staff and students.

Hon. Amin explained that the government’s decision to shift from the use of coal, petrol, oil, crude oil into use and adaptation of clean energy sources such as hydroelectric power, solar energy, solar power, wind energy, biogas is to decrease carbon emission, a major contributor to global warming.

He said, the policy will also be a contribution to addressing the UN Sustainable Development Goal (SDG) 17, aimed at reducing carbon emissions by 2030. Hon. Adam said most countries are now shifting from carbon-based systems of energy production and consumption to cleaner energy sources as a result of the effect it has on the climate. He said, the emission of carbon dioxide from the use of fossil fuel has resulted in the devastating effects of climate change which is now felt the world over.

Explaining the need for the energy transition for Ghana, the Deputy Minster said, moving to clean energy will reduce the temperature to below 1.5 degrees Celsius above pre-industrial levels under the Paris Agreement and also reduce carbon emissions and other Green House Gas.

Hon. Amin noted that the effects of climate change can be felt the world over and in Ghana, it is through rising temperature. These include loss of forest cover, drought and flooding, danger to the human race and economic loss.

He identified some of the opportunities to be derived from the paradigm shift as renewable energy technologies and jobs, lower energy prices as the cost of renewable falls, a healthy environment for human life and the economics of carbon trade and finance.

When the floor was opened for contributions and comments, some of the participants suggested to the government to invest in research and development of wind power, particularly in the coastal areas of the country that normally experience lots of wind. Responding, the Hon. Minister said, research possibilities are open to all agencies in the research of clean energy sources. There was also a suggestion for government to develop all the clean energy sources and give the citizens the opportunity to choose from the lot to increase competition. Another contribution was for the government to introduce clean energy instead of adopting nuclear energy which can be devastating.

In his remarks, the chairman, Prof. Eric Nyarko-Sampson, expressed appreciation to the Deputy Minister for his presentation. He stated that, the Minister’s visit was part of the university’s mission to involve policymakers and industry players in academic programmes.

He said, the university wants to relate to the industry in order to make inputs to influence policy and enrich programmes the university offers. It is collaborating with the Tougaloo College in U.S.A. to build an assembly of a solar panel entity as an alternative livelihood for the youth in the Somanya township and its environs through its Community Engagement and Projects Innovations Unit, (CEPIU), and also explore an exchange programme in renewal energy for faculty and the students.

He said, an MOU has been signed between the UESD and UNESCO Ghana to assist in an energy project that will benefit the youth in communities where Oil is drilled.

Earlier, Hon. Amin and his team met with some members of the UESD Management, in the Vice-Chancellor’s office, to discuss the research possibilities in Ghana’s energy transition.