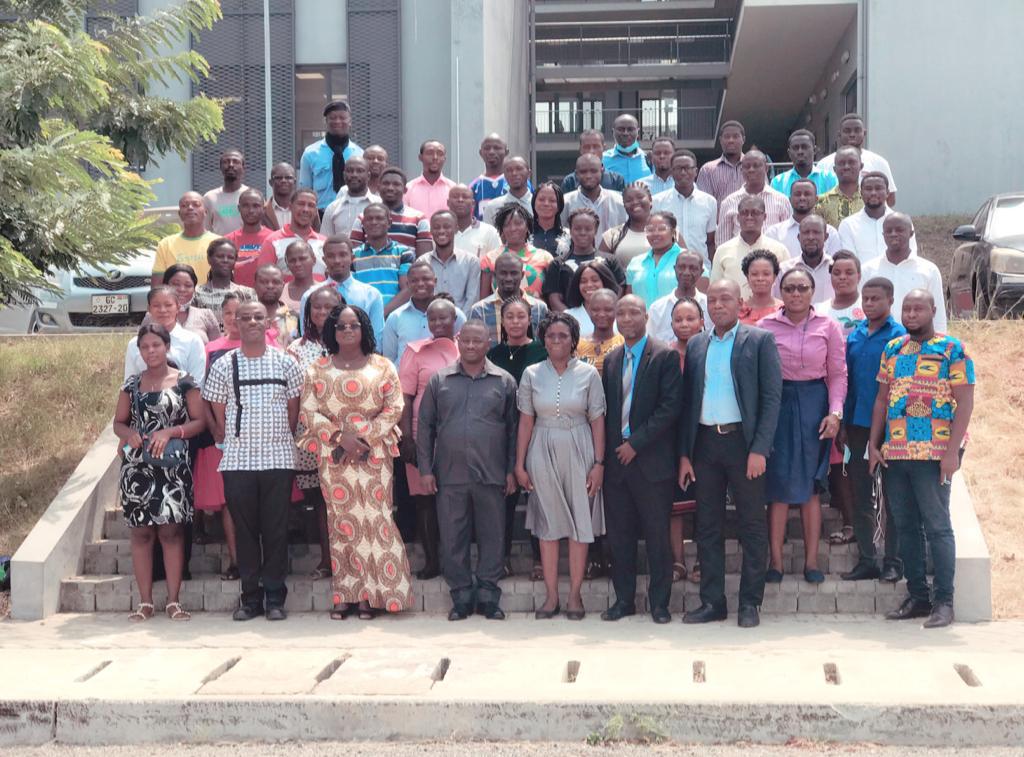 The third session of the UESD HOPE Roadshow workshop for Junior staff members was in two parts. The first part was facilitated by the Secretary to the College of Basic Applied Sciences at the University of Ghana, Mr. Emmanuel Baidoo, and the second, by the Senior Assistant Registrar in charge of Academic Planning and Quality Assurance Unit (APQAU) at UESD, Dr. Padikwor Madjitey.

Mr. Baidoo first touched on the mandate of UESD, that is; to provide higher education, disseminate knowledge related to developments in environment and agro-business education. He complimented it with the University’s core values of Honesty, Opportunity, Perseverance and Enterprising, HOPE.

Explaining the key variables in the core values, beginning with Honesty. Mr. Baidoo said as junior staff, a lot is expected of them because they play critical roles in getting the University running. It is therefore incumbent on them to desist from engaging in vices like pilfering and playing truant. He hinted that sometimes promotion is not based on only qualification but by good character.

He urged them to strive to exhibit integrity in their dealings with their superiors, colleagues, students and the people they come into contact with, with the aim of projecting themselves and the image of the University.

Mr. Baidoo adviced them to take advantage of Opportunities that will come their way to improve especially their level of education.

He said Perseverance encourages staff to work hard to achieve the desired goal and not giving up.

To be Enterprising, they are expected to think outside the box, be innovative and come out with concepts that will improve their work and the image of the UESD in particular.

Mr. Baidoo stated that as juniors, they will grow to become leaders and for one to get there, it will depend on a number of factors, including the level of competence and leadership traits they exhibit. He said, this comes in the form of being of good character, being resourceful, punctual to work, innovative, disciplined, determined and steadfast. He encouraged the Junior staff to endeavour to complete their work schedule on-time, avoiding procrastination and following the rules and regulations of the University.

The second session, facilitated by Dr. Padikwor Madjitey, a Senior Assistant Registrar of the UESD was an interactive one. Dr. Madjitey engaged the participants in the practicalities of the core values and demonstrated vices that define and support HOPE (Honesty, Opportunity, Perseverance, and Enterprise).

The junior staff were made to explain the core values, HOPE in their native dialects to elicit their level of understanding. They explained Honesty to include doing the right things, being truthful, obeying the rules and regulations of the University, having respect for their colleagues and other people who come around, being punctual to work and functions, discipline, having compassion or being empathetic. On Opportunity, they explained it as, a chance one gets to do something or a circumstance that makes it possible to pursue a venture. Perseverance was described as putting in one’s best in spite of obstacles or a time to push through all the negativities or setbacks or taking risks to achieve a goal.

Dr. Madjitey lauded the contributions of the junior staff members and encouraged them to be positive and be ready for change. He also cheered them up to draw their long-term goals and strive towards achieving it.

The Registrar of UESD, Mrs. Mary Abena Agyepong, who was the sessions’ Chairperson, in her remarks said, she was impressed with the level of understanding expressed by members of the Junior staff. She urged them to make “The HOPE Agenda” their hallmark in striving for greatness.

Mrs. Agyepong said, Management encourages and rewards hard-work as is captioned in the mission and vision statement of the University. It also believes in human resource development, thus the reason for the HOPE Road Show aimed at engraving the values of HOPE in all staff and students.

Present at the workshop were some members of Management, Heads of Units and Departments and some guest