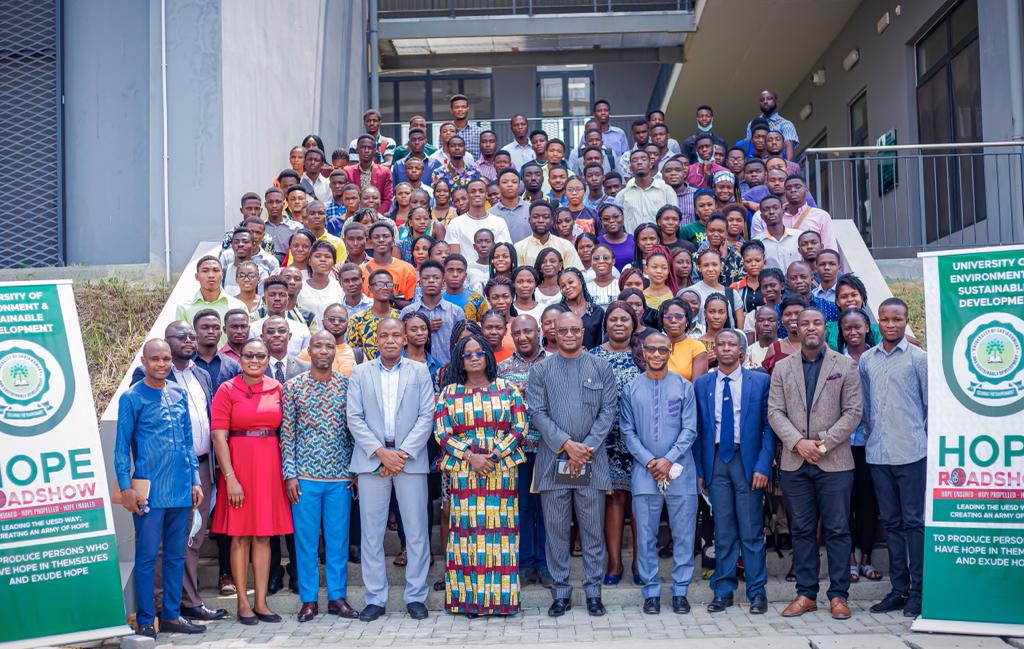 The last five days of the UESD HOPE Roadshow was a conference dedicated to students of the University. The resource persons were; the Vice-Chancellor Prof. Eric Nyarko-Sampson, the Registrar, Mrs Mary Abena Agyepong and the Dean of the School of Sustainable Development, SSD, Prof. Anthony Amoah. The Chairman was the Dean of the School of Natural and Environmental Sciences, (SNES), Prof Edward Wiafe Debrah.

Speaking on the theme: “Leading the UESD WAY – Creating an army of hope”, the Vice-Chancellor, Prof. Nyarko-Sampson explained that the ‘UESD WAY’ involves the creation of an army of ‘HOPE’ imbued with Honesty, Opportunity, Perseverance and Enterprising, for members of the University community and the students in particular. This is to spur them on to remain resolute in the most difficult situations and dare to be positive in the face of intimidation, public ridicule and mockery.

He said, the UESD HOPE mantra is a culture he, Management and staff of the University have pledged to practice and to inculcate in the students who pass through the four walls of the University, to be agents of change in their communities.

Prof. Nyarko-Sampson, who is also a Guidance and Counseling Counselor, urged the youth of Ghana, particularly the students of UESD to consider themselves as ‘masterbrewers’ of their own lives since their success or failure will depend on the choices they make today.

He encouraged them to live the ‘UESD WAY,’ the new way of living on campus which provides hope for the future.

Quoting Jessy Jackson, a civil rights activist in the U.S, Prof. Nyarko-Sampson stated, “today’s students can put dope in their veins or hope in their brains. If they can conceive it and believe it, they can achieve it and they must know that it is not their aptitude but their attitude that will determine their altitude”.

In the same vein, he said, the UESD is determined to implant hope in the brains of the youth of Ghana instead of dope in their veins and, therefore invited those who have qualified for tertiary education, to make UESD their institution of choice; as they consciously join the Army of HOPE for a promise of a brighter future.

When he took his turn, the Dean of the School of Sustainable Development, (SSD) Prof. Anthony Amoah, shared his personal life experience with the students as a testament of a person with determination.

He revealed that in spite of the hardship he faced and the gloomy future life presented itself whilst growing up, he endeavored to keep hope alive. Prof. Amoah stated that the UESD’s core values of Honesty, Opportunity, Perseverance and Enterprise are aligned with his values in life. This is why he chose to join the University family.

He said, living a life of hope means living a unique way of life and as opportunities are being identified and created, one will need perseverance to sail through the discouraging moments. The enterprising skills will help the individuals to think outside the box while creativity sustains progress.

The Economics Professor indicated that the core values of the UESD give assurance to students of their inevitable success in life, and it is for this reason the University is including it in its teaching and learning process. He urged the students to embrace the culture of HOPE and endeavor to stand out among the crowd.

The Registrar of UESD, Mrs. Mary Abena Agyepong, advised the students to adopt a positive mindset to UESD’s unique training, as it resolves to instill in them, rare qualities that guarantee global competitiveness. She acknowledged the global technological advancements in infrastructure, medicine, internet, communication, and artificial intelligence, ‘these have brought about several significant breakthroughs especially in the field of communication,’ she added.

Mrs. Agyepong said, despite the benefits associated with the technological break-through, it is also riddled with challenges, including what she called ‘the creation of faceless demons,’ where young people hide behind the guise of social media to spew insults on the elderly with impunity and also engage in all kinds of vices. She said, such attitudes only spell doom for the future of Ghana and the world, and that sends shivers down her spine.

Mrs. Agyepong quoted a UN statistics which reveals that the generation within the age brackets of fifteen (15) and twenty-four (24) years make up about one-point-two billion (1.2 billion) of the world’s population.

Also, Ghana’s 2021 Population census revealed that the country’s youthful population of about  17.9 million people (about 58 per cent) range between 15 and 35 years out of the more than thirty million people living in the country. He projected that this group of people, who fall within the age range of students of the University, are likely to be at the helm of affairs in the not too distant future and it is important they are led on the right path.

She said, this is why she has thrown her weight behind the Vice-Chancellor, Prof. Eric Nyarko-Sampson, who seeks to provide education in a unique way aimed at producing persons who have hope in themselves, exude hope and are poise to give hope through their knowledge acquired and their work ethics developed over time.

Mrs. Agyepong echoed that the ‘UESD WAY’ seeks to produce students who are honest, create and utilize opportunities, persevere even in difficult times and  who always strive to be enterprising by thinking outside the box.

She was confident that this is the surest way by which graduates can fully be equipped to uniquely position themselves for successful careers. She said, the UESD HOPE agenda, is to give the young Ghanaian generation the opportunity to ‘press the reset button,’ to be well groomed academically and ethically in order to achieve their set goals. She advised them to keep their eyes on the ball and think internationally as the university trains them to be global change agents.

Answering a question on daring to be different, the Registrar said, it does not mean flouting laid down rules and regulations, but choosing to do the right thing no matter the circumstance. The sessions Chairman, Prof. Edward Wiafe Debrah, advised the students to take the knowledge they have acquired seriously.