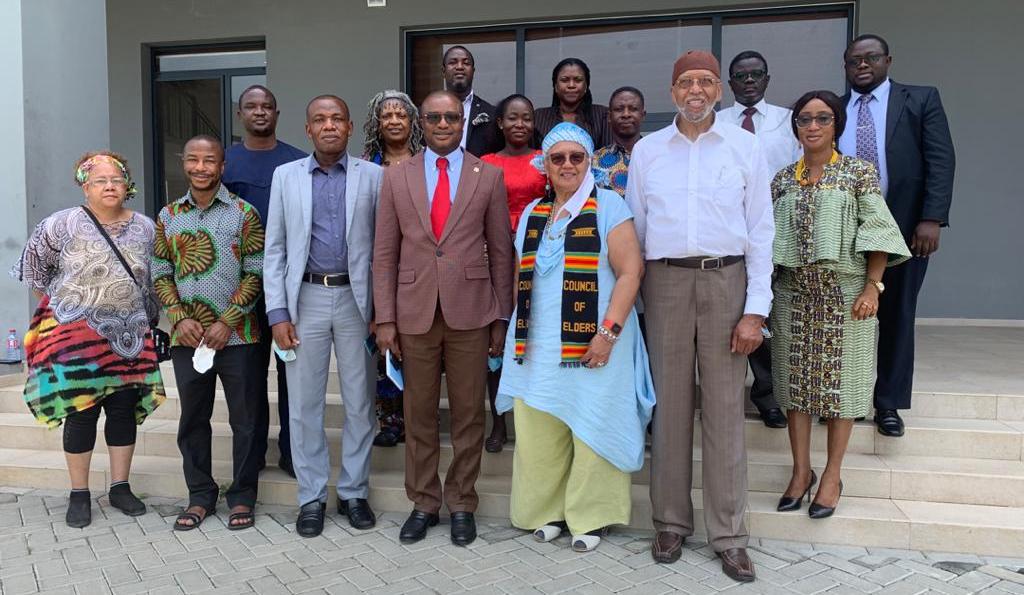 The purpose of the visit was to form a possible collaboration between the two Universities which have similar visions of Sustaining the Environment. Introducing the delegation, the head of communications of the Yilo Krobo Traditional Council, Mr. Francis Opai Tetteh, from the Sra palace, explained that the Wichita State University has formed a partnership with the Yilo Krobo Traditional Council to develop the area.

The Community has therefore adopted the University as the seventh traditional council and recognizes the people as their kinsmen.  He explained that the Traditional council initially had six divisions and has adopted Wichita State University making it the seventh. The other Councils are, the Boti, Oterplolu, Nkurakaa, Obawale, Nsutapong and Somanya.

Mr. Opai Tetteh explained that through the Council’s interactions with the Community Engagements, Projects and Innovations Unit of the UESD headed by Mr. Daniel Ofori-Mintah, it made known to him about the traditional Council’s relationship with the Wichita State University, who then expressed interest in the partnership and arrangements made for the meeting.

The head of the four member delegation from the Wichita State University, Prof. Wakeelah Marting who said she has had 30 years of experience in academia, said her University wants to partner with  the UESD because the University’s mandate of  sustaining the Green Environment’  resonates with her University’s  vision.

Prof. Wakeelah was particularly happy with the Research and Innovation Centre of the UESD because of the immense role she played to develop a similar Centre at her University which has grown in leaps and bounds. She said other collaborations the Wachita State University would want to undertake with the UESD include, instituting a scholarship package for the best student in Agriculture to study at the Kansas State University. Prof. Wakeelah also suggested to the UESD to consider introducing Aviation as a Programme of study at the University as well as Cyber Security.

The Vice-Chancellor of the UESD, Prof. Eric Nyarko-Sampson was happy about the visit by the delegation. He briefed the team on the inception of the University from the inauguration by the President of the Republic, his Excellency Nana Addo Dankwa Akufu-Addo in August 2020 to when operations began.

Prof. Nyarko Sampson also talked about the cutting of the sod by the President for the commencement of the second phase of the University which includes staff accommodation and recreational centres.

The Vice-Chancellor mentioned the Programmes of study at the University which includes; BSc. Sustainable Development, BSc. Mathematic, BSc. Environment and Public Health, BSc. Water Resources Development and BSc. in Energy Sustainability. He told the delegation that all the Programmes of study in the University are Community based with the rational of impacting knowledge.

The members from the UESD management team also took turns to brief the delegation on some of the projects they will be embarking on. These include converting waste into manure for domestic rearing, collaborating with industry to process mangoes into alcoholic beverage and other products. He further indicated that Faculty was preparing to conduct research on how to stop insects from destroying mango plantations.

The discussions also explored possible areas of collaboration including exchange programmes between the two Universities. The second batch of visitors is expected in Ghana in June, 2021