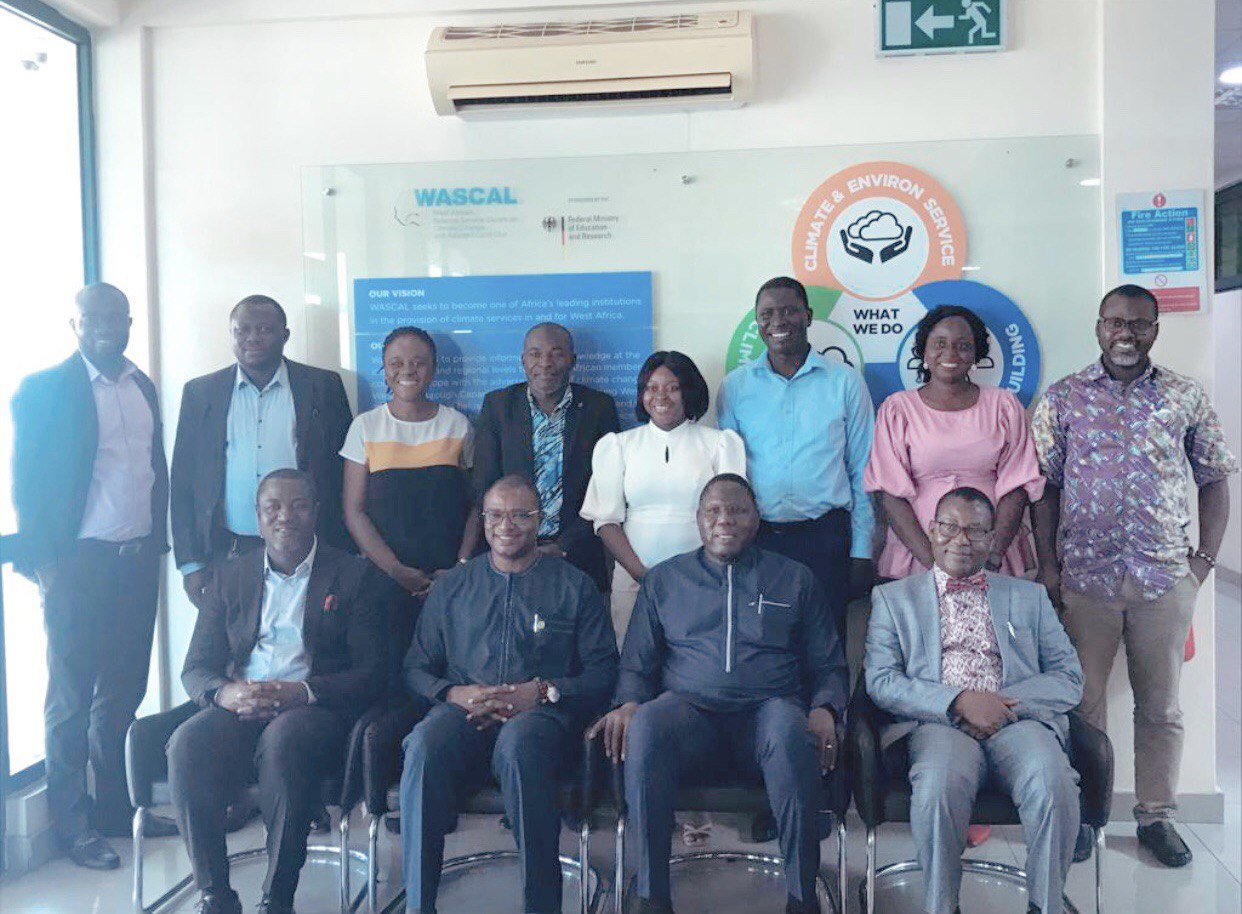 The University of Environment and Sustainable Development (UESD)at Somanya, in the Eastern Region, signed a Memorandum of Understanding, MOU with the West African Science Service Centre on Climate Change and Adapted Land Use (WASCAL)on the 10th of May, 2022 for a partnership in some key areas, at a brief ceremony at its airport office in Accra.

The MOU, signed at the conference room of WASCAL is expected to build a network between the two institutions in Education, Research & Innovation, Services provision, and Social Impact.

The Vice-Chancellor of the UESD Prof. Eric Nyarko-Sampson signed for his university while the Executive Director of WASCAL, Dr. Moumini Savadogo initialed for his institution. It was witnessed by some key persons of both institutions including the Dean of the School of Sustainable Development, (SSD), Prof Anthony Amoah, and some Heads of Departments of WASCAL.

WASCAL is a not-for-profit organization in West Africa, with its Head office in Ouagadougou, Burkina Faso, established to provide information and knowledge at the local, national, and regional levels to its West African member countries to cope with the adverse impact of climate change.

In a short address, the Executive Director of WASCAL, Dr. Moumini Savadogo said, WASCAL achieves its mission through the provision of capacity-building support to young West African Scholars in the fields of natural and social sciences and by strengthening West African universities and climate service departments in WASCAL member countries.

Capacity building, he said, should be seen as a major driver of development for social, communal, and nationwide change, therefore collaborations made in the spirit of building capacity should always be welcomed as it serves as a precursor to development.

Also commenting, the Director of the Capacity Building Department of WASCAL, Prof. Daouda Koné recounted the journey to sign the MOU between the two institutions which started in September 2021, and expressed delight as a dream come true.

He explained that the partnership is aimed at forming a synergy between the two institutions through combined efforts which are expected to yield cost-benefit results, enhancement of facilities, sharing of expertise, and competence, management and effective use of data, and broadening of the scope of teaching and learning.

In his remarks, the Vice-Chancellor of UESD, Prof. Eric Nyarko-Sampson, said the signing is monumental in the history of the University in its two years of existence. The UESD provides a world-class education that will positively change minds and attitudes towards sustainable development.

He said, the university’s mandate is to equip students to be agents of change equipped with the necessary expertise in the protection, development, and sustainability of the environment, which falls in line with WASCAL’s mandate which is in Climate Research, Climate and Environmental services as well as Capacity Building.

He stated that considering the similarity in the scope of operations of the two institutions, he was confident that the MOU would yield great opportunities to both institutions in research, data sharing, students’ internship, and practical lessons among other things.

Prof. Nyarko-Sampson promised the university’s full commitment to the agreement. He said, the university is poised to form partnerships and collaborations with industries, NGOs, and other stakeholders whose scope of operation conforms with the university’s core mandate.

The UESD delegation that witnessed the signing were: the Dean of SSD, Prof. Anthony Amoah: The Head of the Department of Water Resources and Sustainable Development, Dr. Michael  Tuffour; a Lecturer at SSD Dr. Prize Fourth son Yaw McApreko and Mr. Daniel Ofori-Mintah, Head of Community Engagement, Research and Innovations Unit, (CEPIU).