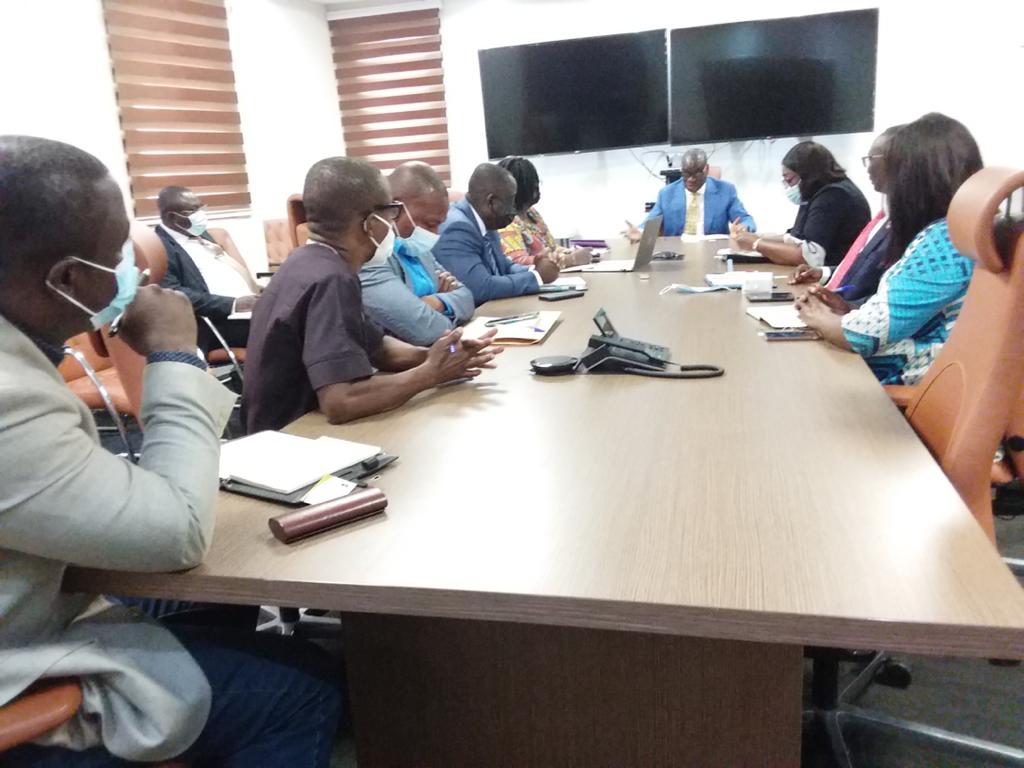 The Ghana National Petroleum Cooperation, GNPC, is to construct a laboratory for the University of Environment and Sustainable, (UESD) to serve its Departments.

This will help cement the beginning of a relationship between the two institutions.

The Chief Executive Officer of the Corporation, Dr. Kofi Koduah Sarpong, said this in response to a request made by the University during a meeting with some members of management who called on him at his office in Tema.

The visit of the team from the University was part of its outreach to institutions and industry. It was made up of the Vice –Chancellor, Prof. Eric Nyarko-Sampson, the Registrar, Mrs. Mary Abena Agyepong, the Deans, and some members of Management.

Dr. Sarpong said, it is the philosophy of the GNPC to make its presence felt in Public Universities and other tertiary institutions in Ghana, through sponsorships, awards and the provision of teaching and learning aids to students and Lecturers.

This, he explained, is one of the surest ways every Ghanaian can be assured of enjoying the benefits of Ghana’s Oil Find.

He said, for equitable distribution of scarce resources, GNPC may need to review its policy on professorial chairs currently in four universities.

Dr. Sarpong indicated that the chair could be rotated in a four (4) – year interval, so that more universities can benefit from the GNPC.

He therefore, urged the UESD to fashion out an area where GNPC can establish a chair.

On programmes at the UESD, Dr. Sarpong said, Management of the University may consider merging programmes that are similar in nature to avoid an overlap.

He also advised Management of the University to run programmes that are devoid of excessive abstracts and rather concentrate on practical and more realistic ones which would ensure that students are appropriately trained and employable at the GNPC and other related areas.

Adding that, ‘the GNPC has sponsorship for PhD candidates. UESD can nominate lecturers for such sponsorships,’ he said.

The General Manager for Sustainability and Stakeholder Relations, at GNPC, Dr. Kwame Baah-Nuako, acknowledged the importance of Economics, especially, in Sustainability related programmes being run by the University, and advised that Economics be fused into specific areas in the curricular of the programmes.

He said since the Oil sector cannot take as many people as agricultural related businesses, it will be well placed for the UESD to expand the agribusiness initiative and get GNPC on board as a sponsor to help develop the sector which will serve as a means of mitigating the Oil curse.

The Vice-Chancellor, of the UESD, Prof. Eric Nyarko-Sampson was happy about GNPC’s intension to extend the tenure of chair to all Public Universities in Ghana.

He also requested Management of the Corporation to extend its scholarship and sponsorship package to brilliant but needy students of the University.

Taking her turn, the Registrar of the University, Mrs. Agyepong Abena Agyepong said, the University’s core values which have been acronymed H.O.P.E, meaning, Honesty, Opportunity, Perseverance and Enterprising, have been carefully crafted to ensure that students who pass out of the University exude these qualities.

She said, it is against the background of honesty, that all admitted students are made to sign an Honour Code during Matriculation.

The essence is to inculcate honesty and truthfulness into them during examinations and beyond.

The Dean of the School of Sustainable Development, SSD, Prof. Anthony Amoah said the University is looking to form a strong bond with the GNPC, especially, in areas of instituting award schemes to motivate the students, having access to data for accurate forecasting and projections, internship for UESD at GNPC andsabbatical industrial experience for Lecturers to equip them with industrial knowledge.

In response, Dr. Sarpong tasked Dr. Baah-Nuako to work on which form the awards for the students would take.

Commenting, the Dean of the School of Natural and Environmental Sciences, SNES, Dr. Edward Wiafe-Debrah said, the University can serve as a consultant for GNPC in Environmental Impact Assessment.

The Director of Finance, Mr. Baffour Awuah-Kwabi, reckoned the difficulty in getting funding from donors. For this reason, the Finance Directorate is always poised to ensure that resources of the University are utilized judiciously to avoid wastage.

These include, ensuring that there are systems that provide for accountability, preparing financial reports with integrity to inspire donors to continue to support, preparing accounts in accordance with International Public Sector Accounting Standards, (IPSAS) and assisting the Vice chancellor to realize his vision and that of the University.

Meanwhile the General Manager for Sustainability and Stakeholder Relations of GNPC, Dr. Baah- Nuako has led a four -member delegation to the UESD campus at Somanya in the Eastern Region to follow up on the University’s request for a laboratory.

They met with the Registrar, Mrs. Mary Abena Agyepong, the technical personnel and other members of Management of the University to finalise processes for the construction of the laboratory.

Dr. Baah-Nuako proposed the month of September to finalise the processes for the construction of the laboratory.

The Registrar, Mrs. Agyepong thanked management of GNPC for acting swiftly to the request of the UESD.
Dr. Baah- Nuako and his team were later shown round the University.