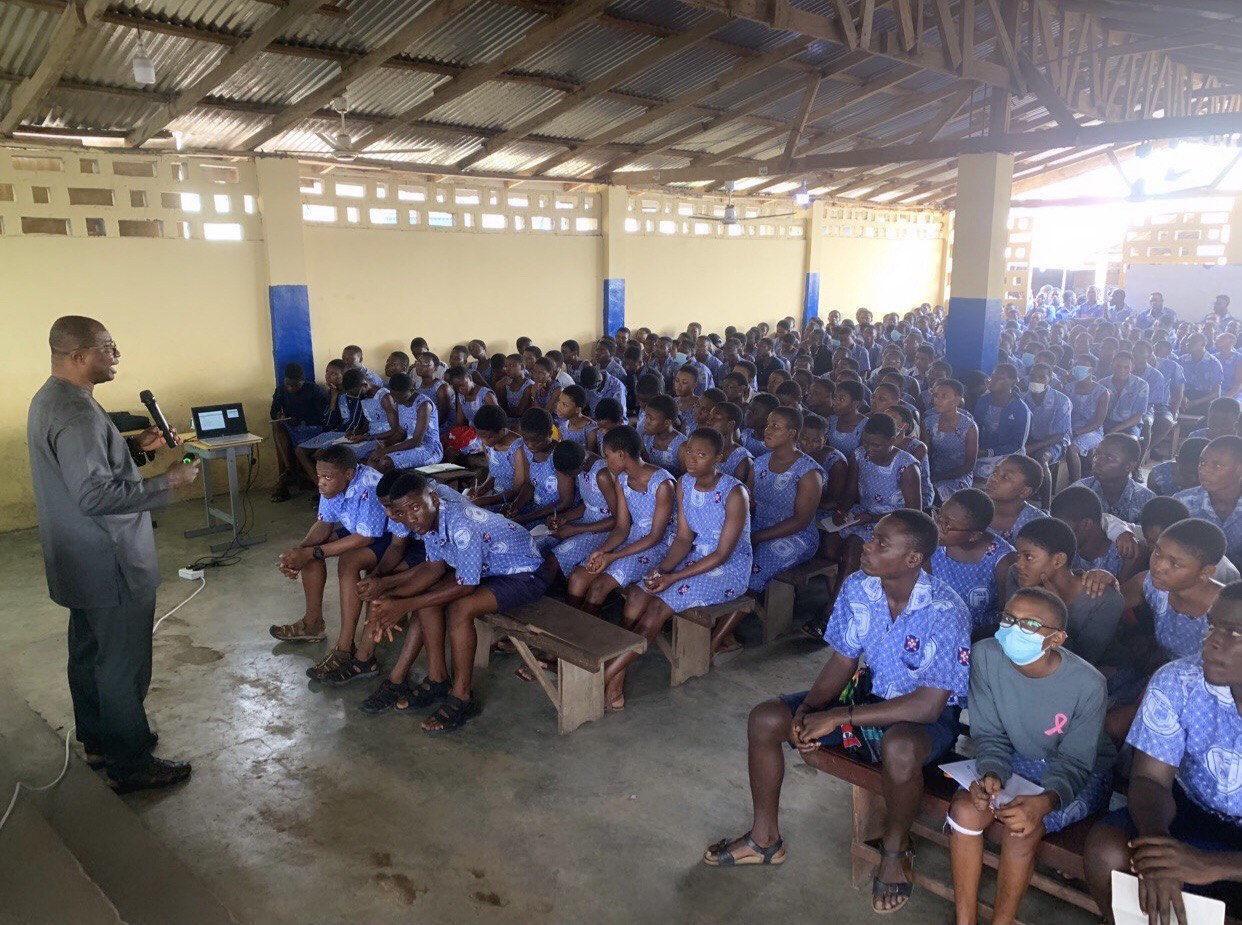 Accompanying the Vice-Chancellor were the Deans of the School of Sustainable Development (SSD), Prof. Anthony Amoah, the Dean of the School of Natural and Environmental Sciences (SNES), Prof. Edward Wiafe Debrah and some Unit Heads.

Their first stop was at the Presbyterian Senior High and Technical School,(PSHTS) Larteh, where they met with the Headmistress, Mrs. Gladys Otoo, and some members of management of the school before meeting the students.

Prof. Nyarko-Sampson reiterated that since the UESD is situated in the Eastern Region and is in close proximity to Akuapem, he embarked on the tour of second cycle schools in the area in order to build ties and also introduce the University and programmes on offer to the students.

In a PowerPoint presentation, Prof. Nyarko-Sampson noted that the UESD which is a science-based institution is currently running two out of five Schools. These are; the School of Sustainable Development (SSD) and the School of Natural and Environmental Sciences (SNES). He revealed that the third school, the School of Built Environment will be added in the 2022/23 academic year. The UESD team later answered questions from the students.

The Vice-Chancellor, during a tour of the school’s laboratories, promised to grant the science students, access to the university’s ultra-modern laboratory any time the need arises. The laboratory, he said, is fully furnished with relevant equipment suitable for practical lessons. He explained that this is one way the University can help students properly conceptualize what they are taught.

The Headmistress, Mrs. Gladys Otoo expressed her profound gratitude to the Vice-Chancellor and his team for the visit. She said, they were particularly humbled and honored that the Vice-Chancellor himself visited and it will go a long way to show that the University cares. She expressed certainty that the visit will go a long way to motivate the staff and also the students to aspire to greater heights.

At the Presbyterian Senior High School at Mampong, the Vice-Chancellor had an interaction with the Headmistress, Madam Augustina Akosua Dankwah and some members of management. Later, Prof. Amoah in a PowerPoint presentation took the students through the programmes currently running in the two Schools, and the ones to be introduced in the third school. He added that the School of Built Environment is scheduled to begin in the 2022/23 academic year.

Prof. Amoah said, as the name denotes, the UESD trains experts to help sustain the environment and ensures that resources are used in a sustainable manner. He said, the university is established to train a new breed of graduates who are well-equipped and better conditioned mentally to join in the campaign for the development and sustainability of the environment.

The Dean of SSD continued that, the UESD is a unique university which is focused on imparting to students, the tenets of Honesty, Opportunity, Perseverance and Enterprise. These are the core values of the University based on which students are being trained as change agents to deal with the country’s environmental challenges.

At the Methodist Girls Senior High School at Mampong, the VC and his team called on the Headmistress of the school in her office and later met with the students in their assembly hall where they had an interaction.

Prof. Anthony Amoah told the students that admission into the various programmes at the university requires a minimum of C6 pass in the three core subjects and three relevant elective subjects in the West African Examination Senior Secondary School Certificate Examination (WASSCE).

He added that SSSCE, GCE ordinary and advanced level and Diploma holders are all eligible for admission. Also, mature persons of a minimum age of 25 years, also qualify for admission after passing an entrance exam.

It was a rainy day on day three and the last day of the Vice-Chancellor’s working visit to schools in the Akuapem and Okere Municipalities. As a result, the team only met with students of Aburi Girls and interacted with the Heads of the Okuapeman and Aburi Presby Secondary Technical, where it was agreed that a virtual meeting would be organized for the students in the two schools.

The meeting with the students of Aburi Girls SHS took place in the school’s assembly hall. The Dean of SSD, Prof. Anthony Amoah spoke to the students and mentioned the programmes offered, the facilities available, the entry requirements and opportunities for scholarship.

On scholarships, Prof. Amoah explained that apart from the government of Ghana Scholarship scheme, the UESD was in the process of establishing an internal scheme for brilliant but needy students. Asked about the opportunities for Home Economics and Nutrition students, the Dean of SNES, Prof. Wiafe Debrah, informed them the School of Agro-business will be introduced to the University and it is expected to host programmes like BSc. Nutrition and Dietetics, Food Science that will cater for students in that range.

In an interaction with the UESD team in the office of the Headmaster of Okuapeman SHC, Rev. Richard Koranteng Afari, he told the UESD team that, Okuapeman SHS once had a vibrant farm that served other schools and some communities. It also served as a field for the students’ practical lessons, and this made Okuapemman stand out from the other Senior High Schools in the district but it has gone down. He added that plans are far advanced to revive it.

Prof. Nyarko Sampson indicated that BSc. Aquaculture, one of the programmes running in the School of Sustainable Development, will better sit with the Agricultural Science students of the school. He said, the introduction of the programme is expected to increase the Eastern region’s contribution to the inland fish stock which currently stands at 40%. He said the programmes are available to provide students and even already practicing aquaculture farmers with modern skills and technologies necessary to increase output.

The UESD team also met with the Assistant Headmistress of Aburi Presbyterian Senior High School, Mrs. Iris Amoah-Boateng, and some heads of department who expressed their excitement about the visit. They were taken around some of the facilities.

The rest of the VC’s delegation were the heads of some Units, made up of Mr. Akwasi Afram Agyekum-Admissions, Ms. Grace Ampong,-Assistant Registrar at the Vice Chancellor’s office, Mr. Daniel Ofori-Mintah-Community Engagement Projects and Innovations Unit (CEPIU), and Ms. Barbara M. Yakubu-University Relations Office.