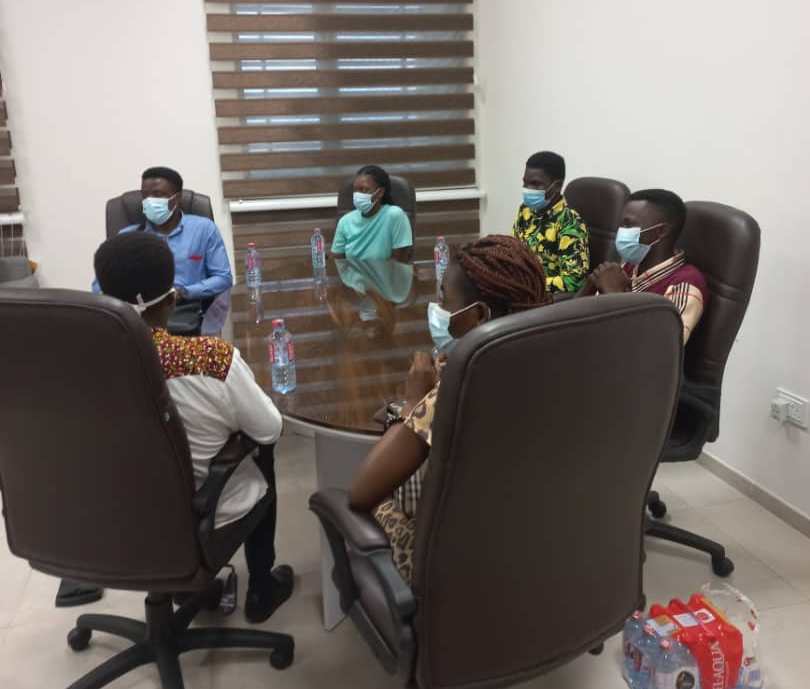 The University of Environment and Sustainable Development, (UESD) at Somanya in the Eastern Region has held its maiden inter Schools debate at the Multipurpose Auditorium of the University.

The debate was between students of the School of Sustainable Development (SSD), and the School of Natural and Environmental Sciences (SNES).

It was organized by the office of the Dean of Students, headed by Dr. Mrs. Daniella Delali Sedegah.

She explained that incomes generated from economic activities are used to cater for ventures like free maternal healthcare and the creation of recreational facilities.

She argued that lack of economic sustainability leads to the inability of the government to protect the environment by enacting laws to preserve and protect it.

This, she said inhibits or slows down the development of a nation.

Supporting the motion, the 2nd speaker for the team, Mr. Richard Padi stated that developed countries now recycle used materials into biogas, and this saves the environment from pollution and misuse.

He indicated that renewable energy such as biogas should be high on the agenda of developing countries, just as the developed world has adopted.

He further explained that the use of biogas as an alternate fuel in homes as against the use of natural gas reduces the emission of gas into the atmosphere which would otherwise cause the depletion of the ozone layer.

He therefore encouraged the government to emulate the steps of developed nations and invest in waste management, create the recycling of plants and renewable energy products for domestic consumption.

He believes this move will increase the economic fortunes of the country whilst securing the environment.

Taking her turn to refute the motion, ‘Economic Sustainability leads to Environmental Sustainability; therefore Economic Sustainability should be National Priority,’ the principal speaker from the School of Natural and Environmental Sciences, SNES, Miss. Doreen Dakwahene, the principal speaker against the motion, contended that most African countries misapply natural resources by over exploration, citing activities of illegal mining popularly referred to as galamsey, which results in the pollution of water bodies.

She argued that, the environment is the driving force behind economic sustainability and without it; there would be no economic activity.

She also contended that natural resources such as cocoa, gold and bauxite generate resources which offer economic sustainability.

Further advancing the argument against the motion, the supporting speaker from SNES, Mr. Bernard Akowuah also argued that, if the purpose of economic activities was to alleviate poverty, there was no need for government to destroy the environment in order to alleviate poverty.

He further argued that the destruction of the environment does not only affect humans but the entire ecosystem which includes all living and non-living things.

He maintained that nature provides almost all resources necessary for economic activities and as such it should be placed above all things.

He explained that degradation of the Environment results in adverse effects such as climate change and health issues.

Mr. Akowuah reiterated that the environment provides resources and shelter for people and destroying it goes a long way to negatively affect economic activities.

He pointed to recent traces of mercury in Ghana’s cocoa as a result of the destruction of the water bodies through the use of chemicals in illegal mining, saying, ‘sadly, this action has infiltrated the soil and water bodies resulting in the contamination of our cocoa beans, one of the major foreign exchange earning products of the nation’, he concluded.

After three rounds of intense arguments,, the judges for the event, Dr. Padikor Madjitey, Senior Assistant Registrar in charge of Academic Planning and Quality Assurance, APQA, Dr. Emmanuel Kofi Ayisi, a Lecturer in Water Resource and Sustainable Development at SSD and Dr. Maxwell Owusu Twum, a Lecturer in Environment and Public Health at SNES adjudged the debaters of the School of Sustainable Development, SSD as winners of the maiden UESD inter Schools competition.

They won with 107 points as against their opponents from the School of Natural and Environmental Sciences, SNES, who had 104 points.

The Head of Quality Assurance Unit, APQAU of UESD, Dr. Richard Amfo-Otu in his remarks, congratulated both teams on an impressive exercise, describing their performance as spectacular.

He urged their colleagues to also avail themselves for similar events that would take place on campus to market themselves and asked the organizers of the competition to co-ordinate such educative events regularly.
The Dean of Students, Dr. Mrs. Daniella Delali Sedegah, expressed appreciation to the debaters and the judges for their participation as well as Management, Faculty, staff and the students who attended.

The debate was attended by some members of Management including the Director of Finance, Mr. BaffuorAwua-Kwabi, the Deans of SSD and SNES, Prof. Anthony Amoah and Prof. Wiafe Debrah, Faculty members, teaching and non-teaching staff and students.

Each of the six debaters was later presented with a certificate with a separate one going to the winners of the competition, from the School of Sustainable Development, SSD.

The presentation took place in the office of the Vice-Chancellor, Prof. Eric Nyarko-Sampson. It was witnessed by the Registrar, Mrs Mary Abena Agyepong, the Head of Department of Water Resources and School of Sustainable Development, Dr. Michael Tuffuor and as the SRC President, Mr. Certainly Dangatey.